A Weekend in Indianapolis: Good Brews and Fresh Food 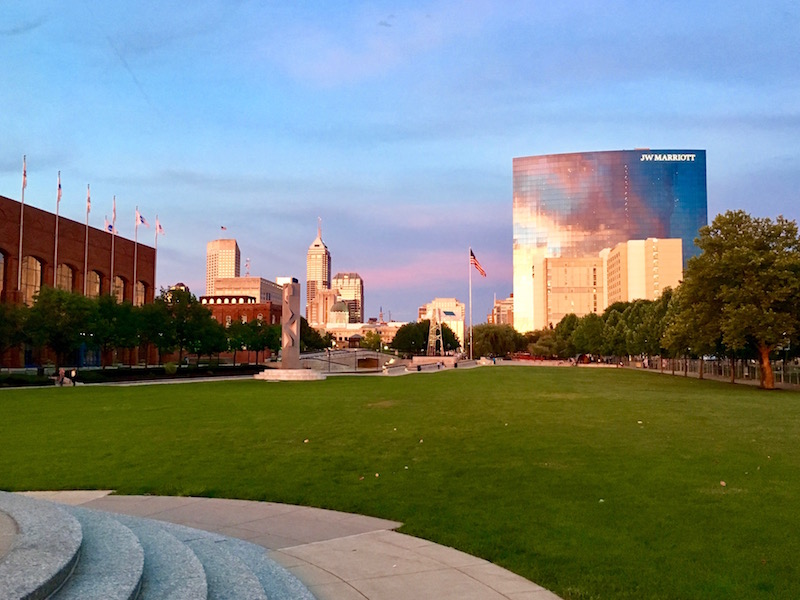 Are you looking for the best places to eat and drink in Indianapolis? Here is a roundup of the bars, breweries and restaurants I discovered during my June trip.

Where to Eat and Drink in Indianapolis

Last month I made my first visit to Indianapolis, Indiana, thanks to BlogHouse, a boot camp for emerging travel bloggers. The conference is hosted in a different city every year, and this year a group of 15 of us spent four days learning and exploring together in this very hospitable midwestern city. We also squeezed in plenty of eating and drinking. Read on to find out the places I enjoyed the most.

Where to Drink in Indianapolis

Given Indy’s love for speed and sports, it’s not surprising that the city also likes its beer, and I’m glad to report that I drank my fair share while I was there.

Visit Indy held a welcome party for us at the Indianapolis Zoo, where we got a behind-the-scenes tour of the aquarium and front-row seats to watch its 10 dolphin residents be served their evening meal (in exchange for a few tricks). We then joined in the festivities at Zoolapalooza, a weekly event for local residents to enjoy food, drinks and music after hours under the stunning Bicentennial Pavilion.

Next to the bar, we noticed a small cooler set up with a few taps manned by two guys wearing shirts that said, “Drink beer and save animals.” As a beer drinker and animal lover, I was intrigued. My blogger friends and I introduced ourselves and peppered them with questions while sampling their two offerings. We learned that Cole and Michael work for a two-year old craft brewery called Metazoa, which gives 5 percent of its proceeds to wildlife and animal charities.

Impressed with both their mission and their beer, we decided to pay a visit to their animal-friendly taproom the following night and found it packed with humans and canines alike (We heard that other four-legged guests have included a pig and a cat). In addition to the Midwest IPA I tried at the zoo, I sampled three more of the roughly 15 beers on tap – including the Session, and the creatively named Kinkajou and Walk in the Dark.

And here’s a few more…

Unfortunately, I didn’t have time during my short trip to fully explore Indy’s booming beer scene, so here are four area breweries that the Metazoa guys recommended – in addition to their own of course!

On the other end of the spectrum from a hip new craft brewery is the traditional German beerhall known as Rathskeller – it’s Indy’s oldest restaurant, having been in operation since 1894. From what I was told by the local friends who took me there, it’s a popular spot for the “everyman” to grab a beer after work.

Another fun fact about Rathskeller is that it was founded by Kurt Vonnegut’s grandfather. Located just off Mass Ave., the red brick Athenaeum Building looks a little out of place among the pale boxy high rises that surround it. And the inside isn’t something you’ll see elsewhere in the city either – the walls soar several stories high and are covered with beer hall banners and animal heads, while the tables are covered with checkered tablecloths and giant beer steins.

The Rathskeller has live music Wednesday through Sunday nights.

Rathskeller have six of its own beers on draft, as well as an extensive selection of American craft beers and European imports. I chose to drink local and ordered the house Hefe Weisse. Since it was a warm summer evening, my friends and I enjoyed our drinks at one of the dozens of picnic tables located in the spacious biergarten out back.

Where to Eat in Indianapolis

While you can easily find all of the popular chain restaurants downtown, I was excited to find so many independent establishments in the city that are making the most of their close proximity to farms and dairies.

Our first full day in Indianapolis was a rainy one, and a filling lunch from Napolese hit the spot. Napolese is an “artisanal pizzeria” that is part of The Patachou Inc. restaurant group, which is committed to sourcing many ingredients locally. To start we were served generous portions of appetizers like fava bean hummus and a variety of salads. As for pizzas I chowed down three pieces of the vegetarian standard, the Margarita, while others were able to be more adventurous with toppings like salmon and sausage. (The staff was also very accommodating to dietary restrictions, which I always appreciate.)

So many good choices at Public Greens!

After BlogHouse wrapped up on Sunday, a few other bloggers and I took a cab about 20 minutes north of downtown to explore the neighborhood of Broad Ripple Village. There I found a bluegrass band playing on a porch, an antique and craft fair underway, and a stream filled with kayakers, which made me feel like I was in a Colorado mountain town that was dropped in the middle of the prairie.

The main draw for us was Public Greens, a sister restaurant of Napolese. All of Public Greens’ proceeds are given to the The Patachou Foundation, which works to combat food insecurity in the city. The restaurant is cafeteria style – there’s a fixed price for one, two or three small plates, or you can choose a heartier entry – and its indoor and outdoor tables are decorated with vases of fresh flowers.

My beautiful lunch at Public Greens consisted of orzo pasta salad, and bread topped with goat cheese and tomatoes.

Outside Public Greens on the other side of the towpath, you have the unique opportunity to see where your food comes from. There is an actual “public garden,” where you are encouraged to touch, smell and taste the variety of herbs that are planted there, and there are garden beds lined with vegetables like kale, corn, beets, and carrots, which are used by The Foundation and the restaurant.

After returning from Broad Ripple, I went back out for more food with my local friends, ending up at The Garden Table, a farm-to-table restaurant on Mass Ave. (They actually have a Broad Ripple location too.) We started by sharing the cheese tray, which was one of the most beautiful presentations of food I have ever seen, and for my meal I opted for the kale salad. One of my friends, who had the pasta special, referred to the meal as “joyous,” which is high praise given that he and his wife own a farm about 45 minutes outside of Indy.

How gorgeous is this cheese tray?

And here are a few more…

After wrapping up our tour of the Children’s Museum of Indianapolis – the world’s largest children’s museum! – on Saturday, a group of us decided to check out Indy’s nightlife. We hopped in a cab to Fountain Square, where we found Revolucion, a contemporary Mexican place with an energetic, artsy vibe. It also has a tiki bar out back, if you want to have a post-taco cocktail.

The next day while in Broad Ripple we stopped by the Cake Bake Shop, a favorite bakery of stars including Elton John. It’s a tiny white cottage that’s a swirl of pink, glitter, sparkles, and ribbons on the inside – it looks like something out of a children’s book. And the desserts are not only pretty but they are quite yummy too. I took the plunge and bought a lemon square for $6, and it was worth every penny (It was so large I ate it in three different sittings).

My friends opted for a more appropriate warm-weather treat, ice cream. Brics seems to be the place to go in Broad Ripple – it was mobbed – and my friends all seemed to enjoy their creations.

For even more recommendations on the best places to eat and drink in Indianapolis, along with what to see and do in the city, check out these posts by my BlogHouse friends:

Did you know? Indianapolis is home to the second-highest number of monuments of any city in the U.S. – Washington, D.C., has the top spot.

Thank you to BlogHouse sponsors Visit Indy, Visit Indiana and the JW Marriott Indianapolis for being such generous hosts. 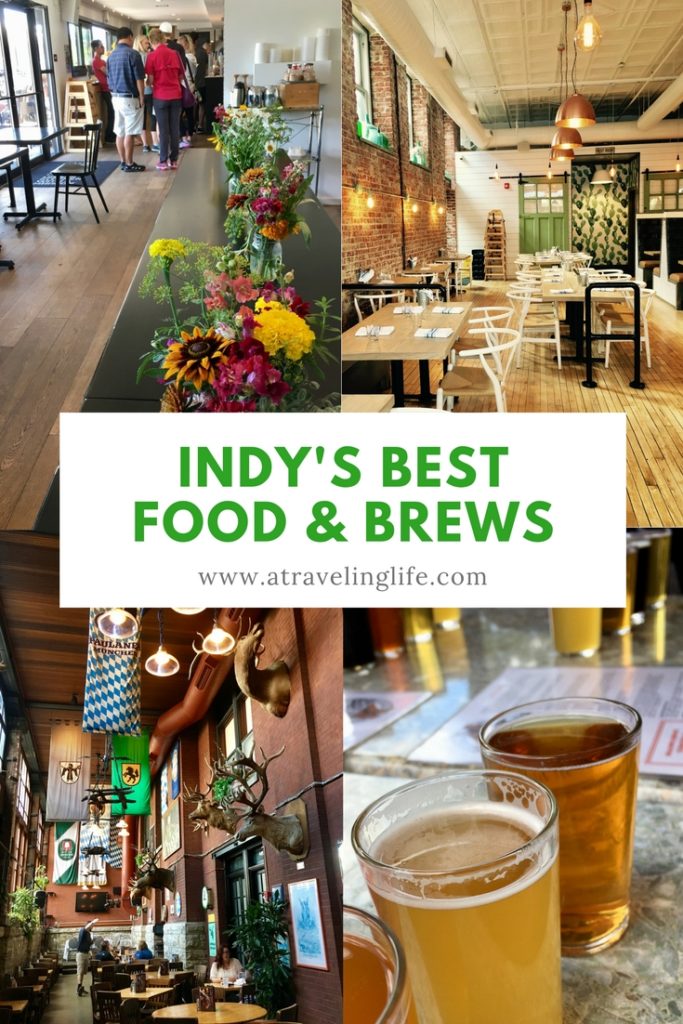 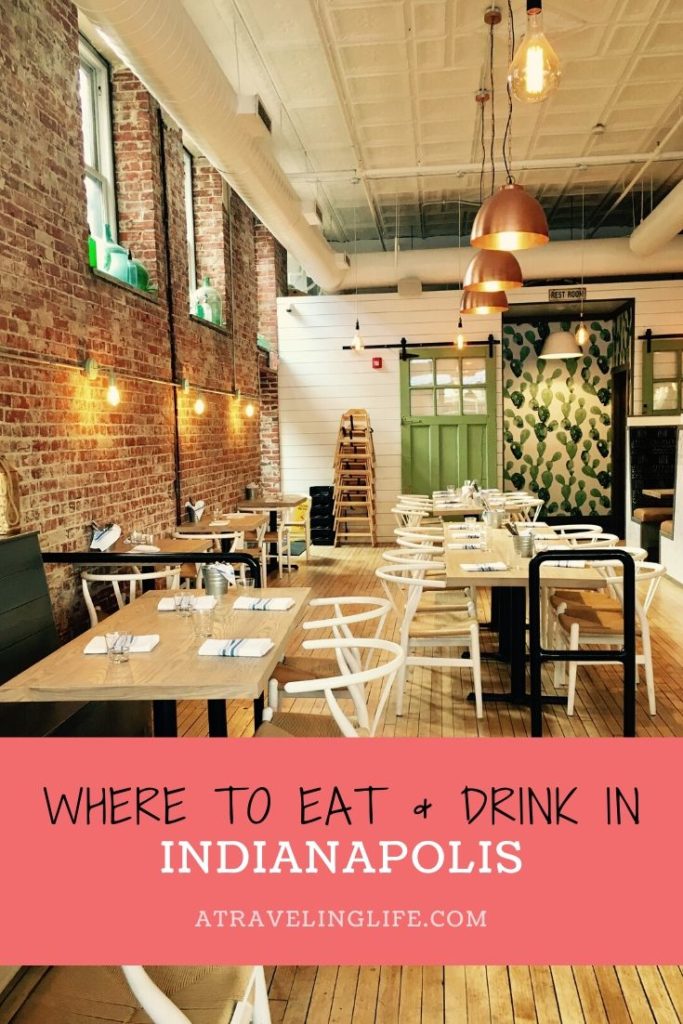 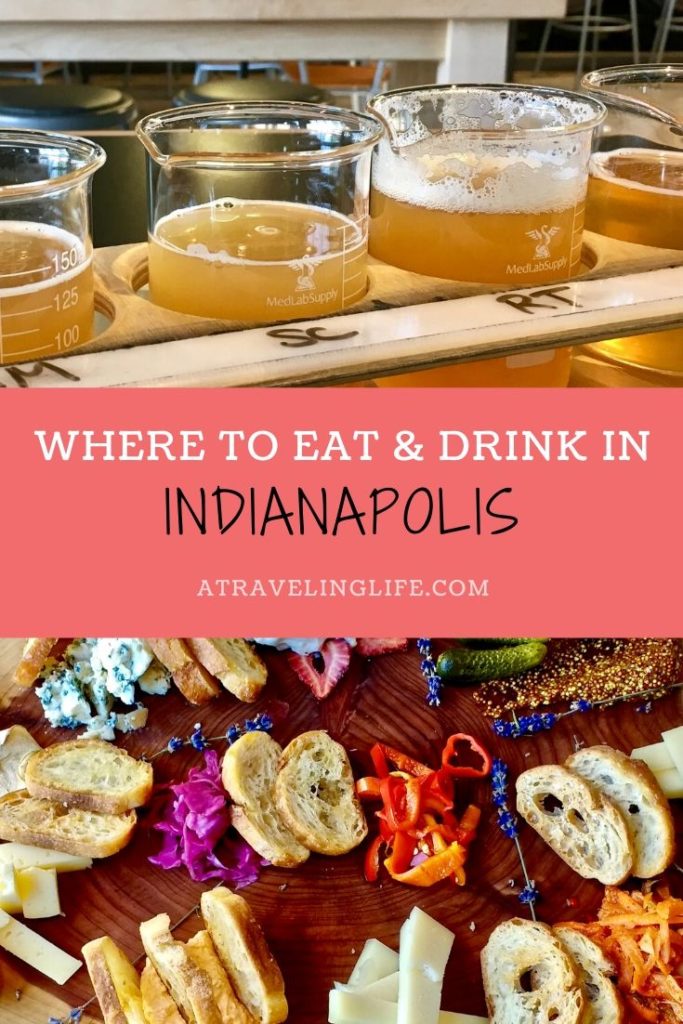