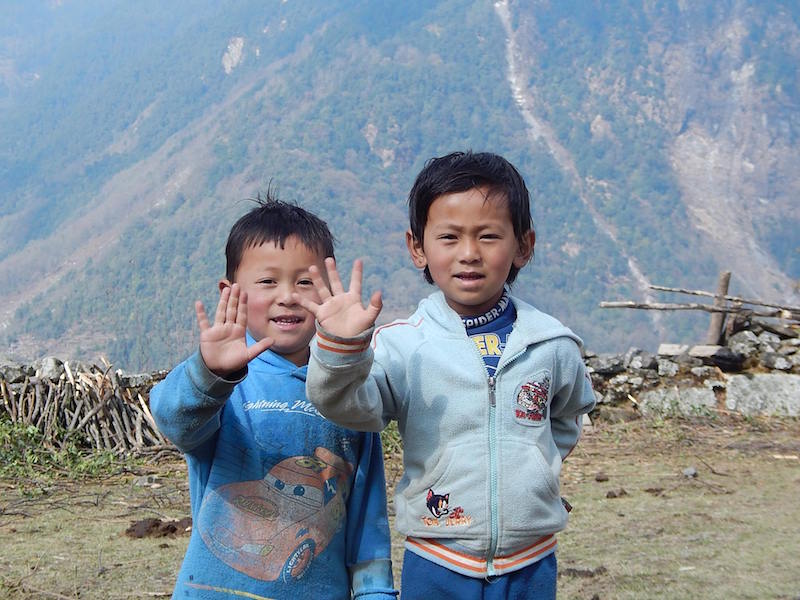 April 25 marked the two-year anniversary of the devastating Nepal earthquake, which left nearly 9,000 people dead and 22,000 people injured, and leveled countless homes and cultural and religious sites. I haven’t been to Nepal in more than 10 years, but it remains a very special place to me. Since I’ve been curious about what life is like there these days, I reached out to two NGOs based in Nepal – Aythos and Volunteer Services and Support Nepal (VSSN) | BringBooks. 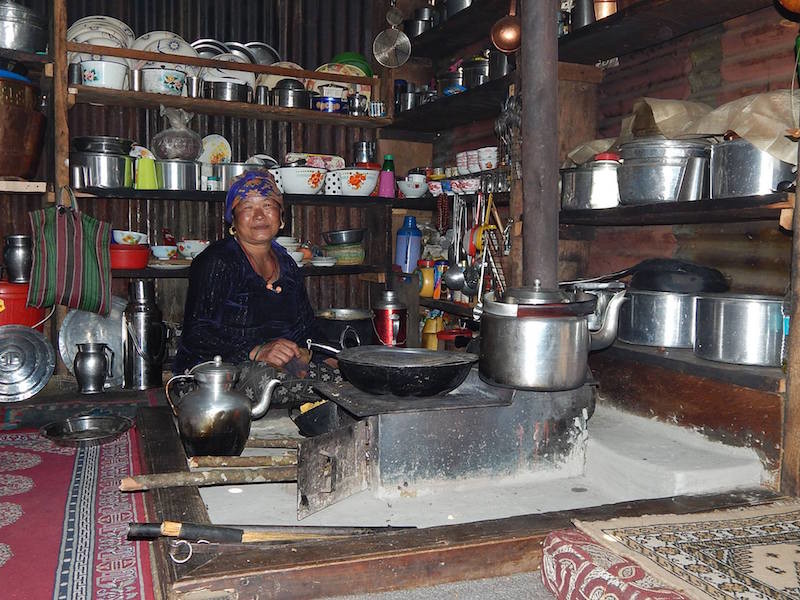 This is Jiba, who maintains an apple orchard with her husband. Thanks to Aythos they received a greenhouse, and attended vegetable farming training and fruit tree orchard training. She hopes to earn enough income to send her son to a good school. (Photo credit: Aythos)

I first connected with Aythos soon after the earthquake, then interviewed its founder, Beau, again last year on the one-year anniversary; VSSN | BringBooks is a partner organization of Visit.org, for which I serve as an Ambassador. Shanti Regmi, head of women empowerment projects for Aythos, and Matrika Rija, program coordinator for VSSN | BringBooks, were nice enough to take time to answer my questions via email and fill me in on how the earthquake continues to affect Nepalis, and how it’s impacted the work of their organizations over the past two years.

Their work has returned to normal over this past second year.

Both NGOs put their regular programs on hold for the first year after the earthquake to focus on relief and rebuilding efforts. Aythos supports rural communities through agricultural projects that allow people to earn critical income and feed their families, while VSSN places international volunteers throughout the country; BringBooks is a VSSN initiative that encourages travelers to bring children’s books to Nepal with them to be donated to schools and libraries.

Our work is back to normal. The mission of our organization has not changed. We are working in the earthquake affected areas targeting the victims, women, children, marginalized groups of people.

Following the earthquake, VSSN made around 20 temporary houses, did some immediate response for food in some villages, collected some donations, and distributed donations to some schools and affected groups. We no longer are placing volunteers for rebuilding – instead, volunteers are supporting schools.

A lot of rebuilding still needs to be done.

Only about five percent of structures that were damaged or destroyed in the earthquake have been rebuilt – 800,000 families remain homeless. The Nepalese government is supposed to be providing financial assistance to citizens who lost homes; however, only the first of three installments has been paid.

Boudhanath Stupa, one of the UNESCO World Heritage sites, is the only stupa which has been completely built so far. Other than that, everyone is waiting for the government to rebuild their homes, cultural heritage sites and so on.

Aythos recently held a summer pruning training with Everything Organic Nursery for 84 farmers from four villages. The purpose of the training was to create better fruits that will bring in a higher price at the market this fall. (Photo credit: Aythos)

NGOs still have an important role to play in rebuilding efforts.

Elections are being held in Nepal for the first time in 20 years this year, so government officials have shifted their attention away from rebuilding efforts and toward campaigning.

Lots of things need to be done in order to improve these victims’ lives. We don’t have any hope and trust in the Nepal’s government. So, different NGOs/ International NGOs work together in those areas to generate income opportunities. Lots of schools and hospitals demolished during the earthquake need to be rebuilt again. Thankfully there are some organizations which have been doing such great work.

But, again the biggest concern here is the political instability in Nepal which hinders these organizations to work in a fruitful and peaceful environment. There is no consistency in the government. Now, one of the biggest elections is coming nearer*. Most of the government’s concern is focused on the election rather than these earthquake victims, which is so upsetting.

* The local elections are taking place in three phases this year: May 14, June 28 and September 18.

…There are lot of things we can do directly to help the victims from our side. We still can do a lot on education, health and water sanitation, shelter, and income generation to help earthquake victims’ basic needs. If we wait for the government to do things then there is no point of our existence… NGOs exist in this country because our government is not able to do enough, and we help the government by doing what they are supposed to do.

Tourism is more important to Nepal than ever.

Tourist arrivals plummeted 85 percent after the earthquake, but tourism is off to a strong start in 2017. In fact, the Nepal Tourism Board expects tourism to double this year, after word has been spread that Nepal is open and safe for visitors.

Tourism in Nepal has always played such an important role in our national economy. Right after the earthquake, the number of tourists decreased resulting in so many people being jobless and depressed. Post-earthquake tourism will play a great role by creating employment opportunities for the people. People will surely get hope and energy to start from a new beginning.

I think travelers are the best sources for transmitting information. When they travel to Nepal, they’ll surely see the real condition of the victims, their lifestyle – which the earthquake has changed. After seeing all this, I think travelers should just not take photos and keep them hanging somewhere on their wall or in their diary. Rather, they can try making the rest of the people in this world aware about the condition of these victims by pressuring the Nepal government to take necessary actions instantly.

Aythos provided tree tubes to farmers in the Himalayan village of Bremang to protect crops from pests and wild animals (Photo credit: Aythos).

Many thanks to Shanti and Matrika for taking the time to answer my questions this spring. Their original answers were edited for grammar and length. 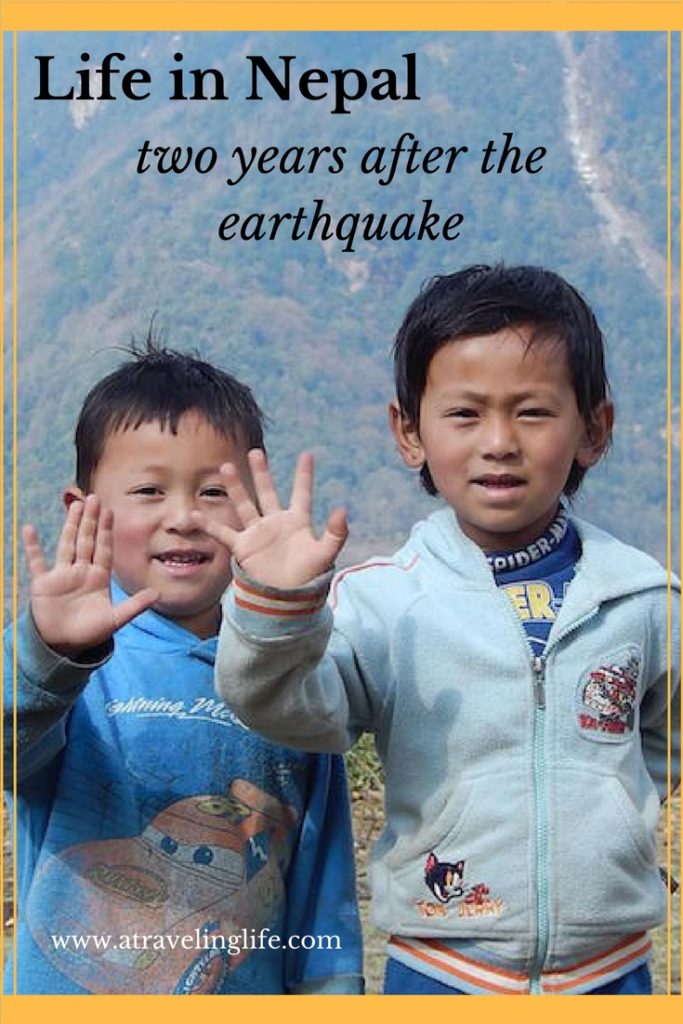