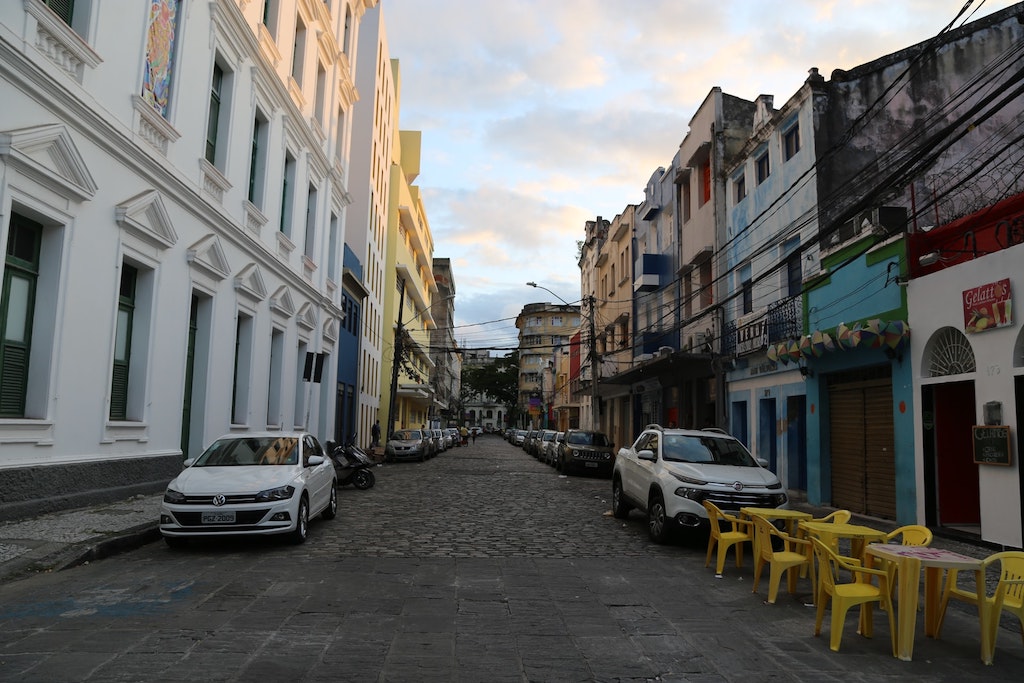 Dreaming of traveling to Brazil? Want to try out some Brazilian cuisine at home?

In this guest post, Amy of Out Chasing Stars shares her recommendations for experiencing Brazilian cuisine in Recife, Brazil – the lively capital city of the northeast state of Pernambuco. She and husband, David, stopped there on their around-the-world sailing trip.

Brazilian Cuisine: What to Eat

Prior to visiting Brazil, I knew very little about Brazilian cuisine. I had no idea there would be so many delicious dishes to try, and that they would be so unique – both to the country and to the region. In fact, Brazil ended up being one of our favorite destinations for food. It helped that our friends Hans and Karina live in Recife, and they were so happy to introduce us to their delicious food. That meant joining us at restaurants and even having us in their home for a fantastic Brazilian barbeque. 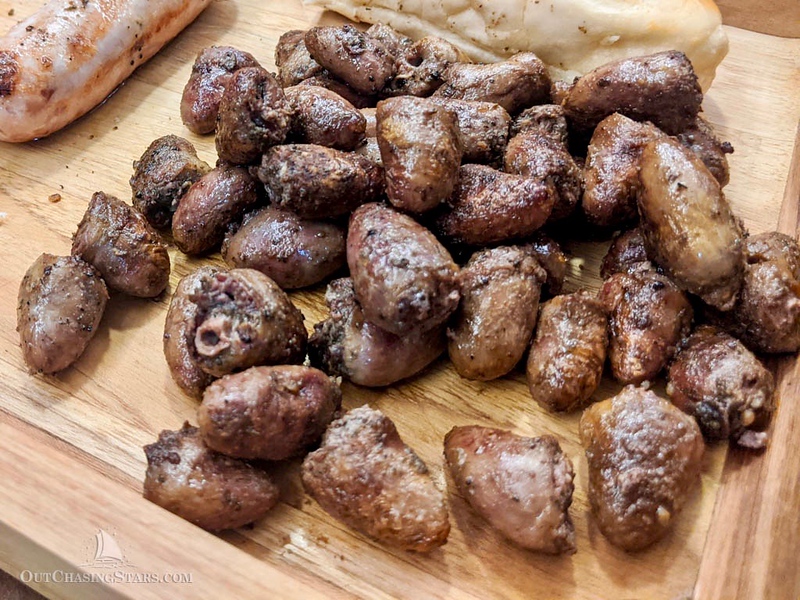 No visit to Brazil is complete without a trip to a churrascaria. Churrasco in Portuguese means “grilled meat,” and this style of eating meat is extremely popular in Brazil and Argentina. (Americans might be familiar with churrasco thanks to the chain Fogo de Chão, which has over 40 locations throughout the U.S.)

In Recife, our friends took us to Spettus in Boa Viagem for churrasco. As you can imagine, it’s a very meat-heavy meal, but we started out with the buffet, which had all kinds of salads and sides to enjoy before the meat. The waitstaff brings the meat around to the table on a large skewer and tells everyone what it is. Each diner has a coaster near their plate – one side red, one side green. Green means, “Yes, I want more meat!,” and red means you’re in a food coma. You can also say “sim,” which means “yes,” and they will carve off a little slice of the meat for you. Each place setting includes a small pair of tongs – you use them to grab the meat that’s being carved off the skewer and put it on your plate.

We tried a lot of different beef cuts, some more lean than others. There were also cuts of chicken and turkey available, but the star is definitely the beef. Hans explained that the meat is only seasoned with coarse salt, and perfectly seared to retain the juices.

While walking around Carnaval in Recife Antigo, I saw many food carts with glass display cases showing pear-shaped pastries. I later learned that these are called coxinha – pronounced co-shin-ya – and they’re fried balls of doughy goodness. Most often, we saw these treats filled with chicken or beef, and they almost always had cheese in them.

This is one of my favorite dishes I discovered in Recife. Moranga means pumpkin or gourd (not to be confused with morango, which means strawberry. Google is apparently confused by this), and camarão means shrimp – so this dish is pumpkin stuffed with shrimp.

The presentation is absolutely beautiful, and it’s served family-style. The whole pumpkin is roasted, then filled with a sauce. Sometimes the sauce is cream-based, but we also tried a mango sauce as well, which was really good. The sauce has shrimp, onions, and tomatoes inside, and then the whole pumpkin is finished in the oven again. It is usually served with rice, and the portions are so large that we often took home leftovers. (We ate one of these stuffed pumpkins at Oficina do Sabor in Olinda.)

This dish is one we tried in our friends’ home. Farofa is a side dish, similar to grits or polenta, but drier. It’s made of cassava or cornmeal and cooked in fat (Hans cooked it in bacon and butter).

A picanha is a cut of beef, called a sirloin cap in the U.S. Usually, this meat is broken down into smaller cuts and the cap of fat is tossed, which is a huge shame. The picanha is extremely popular in Brazil, and we constantly saw it being cooked at the outdoor kitchens in the marina. Hans cooked it for us on his grill, and it was also, unanimously, the best cut that we tried at the churrascaria. 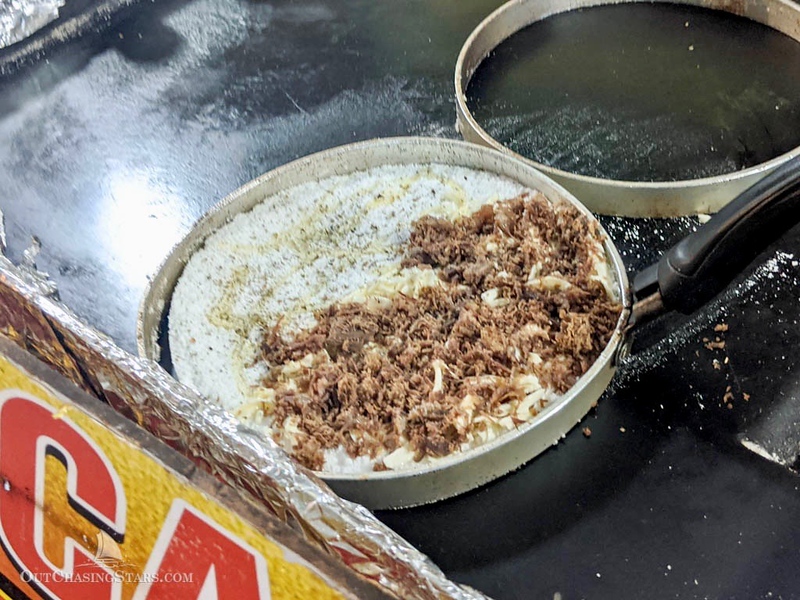 When Americans typically think of tapioca, it’s tapioca pudding that they are thinking of, a thick, sweet dish. In Brazil, tapioca – the dish – is similar to a French crepe. Tapioca flour (made from cassava) is poured dry into a ring on a flattop grill. As it is heated, it starts to stick together. Once flipped, it’s filled with a variety of things – usually meats and cheese, or sweets such as Nutella or “Romeo e Juliette,” which is sweet cheese and guava. 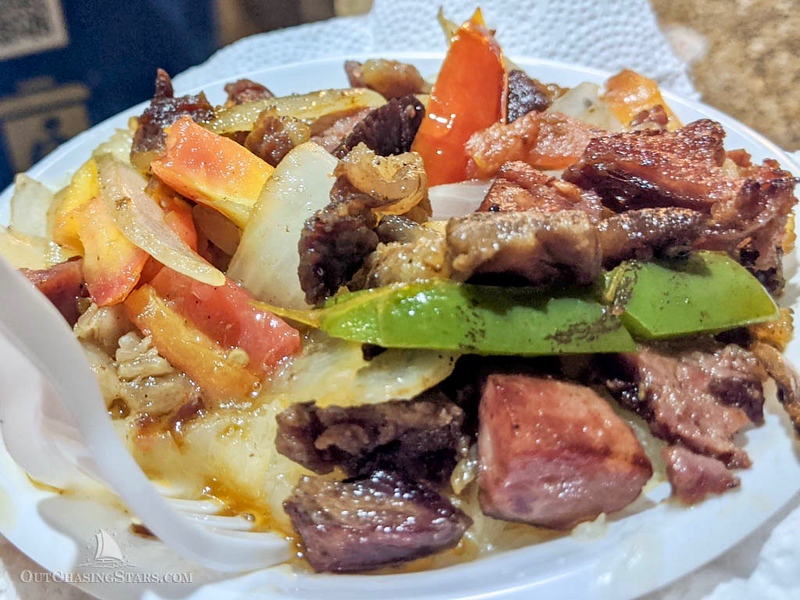 I ate this dish during Carnaval in Recife Antigo. Macaxeira (pronounced maca-shee-era) is cassava, which in this dish is cut into long chunks and steamed. It’s piled into a bowl and topped with sautéed vegetables and grilled beef. 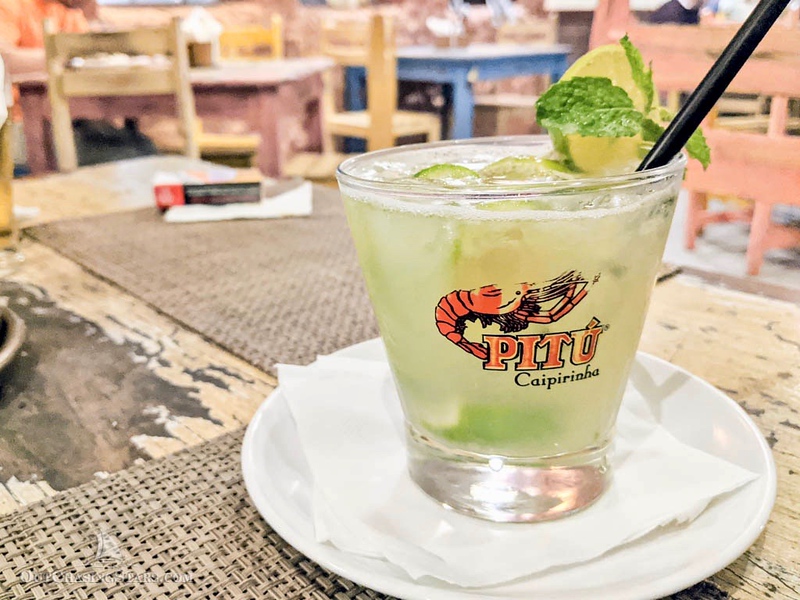 Caipirinha: What to Drink in Brazil

This drink is Brazil’s national cocktail and is simple to make. It’s lime, sugar, and cachaça, a spirit made from sugar cane juice. Pitú is the most common brand of cachaça. It is a strong drink, but the lime and the sugar mask the taste of the alcohol, so go easy on the drink! 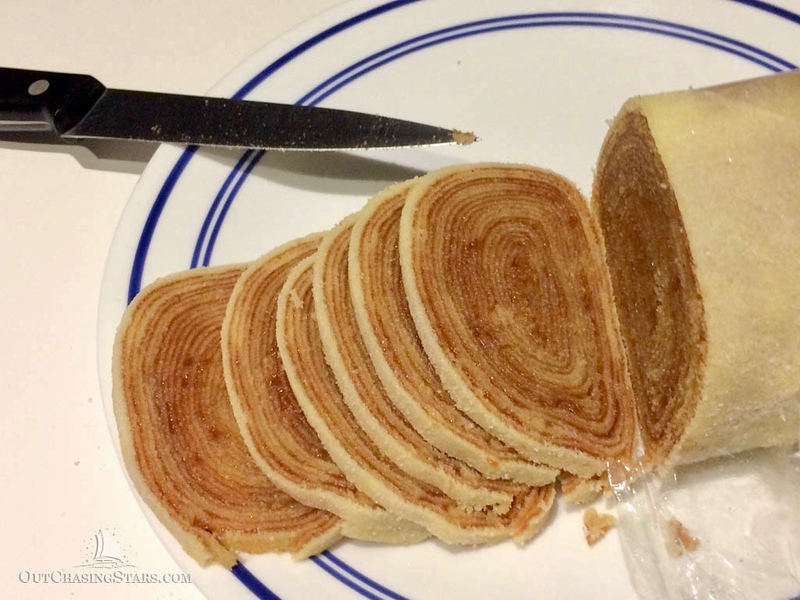 Bolo de rolo is one of the best things we had in Brazil. It is similar to a swiss roll, but the cake is in very very thin layers and the filling is traditionally based in guava. The roll is served sliced very thin. It also comes in flavors like chocolate and dulce de leche. 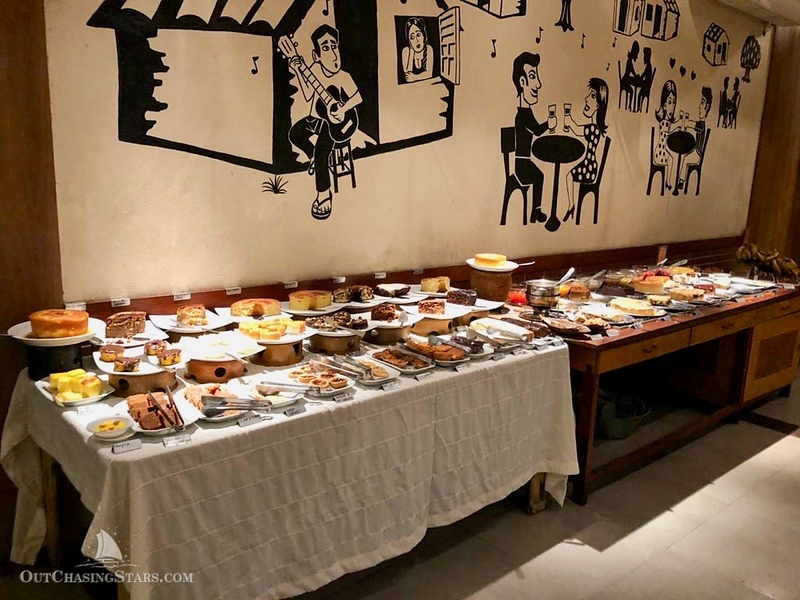 Parraxaxa Buffet: Where to Eat in Recife

Our friends wanted to get us to experience a wide variety of local cuisines, so they took us to a restaurant called Parraxaxa. Primarily, this restaurant is a buffet and serves a variety of dishes that are regional to northeastern Brazil. There were more than a hundred dishes on the buffet, and we tried things like stewed pork and grilled sole, which sounds simple but were created with local recipes and ingredients.

What other Brazilian cuisine to do you recommend?

About Amy & Out Chasing Stars

Amy has spent the past five years sailing around the world on her sailboat, Starry Horizons, with her husband. They finished their world circumnavigation in March 2020, and share their adventures at their blog OutChasingStars.com.

This is the 10th post in the “My Favorite Food Town” series. Check out the previous post on Asheville, North Carolina. 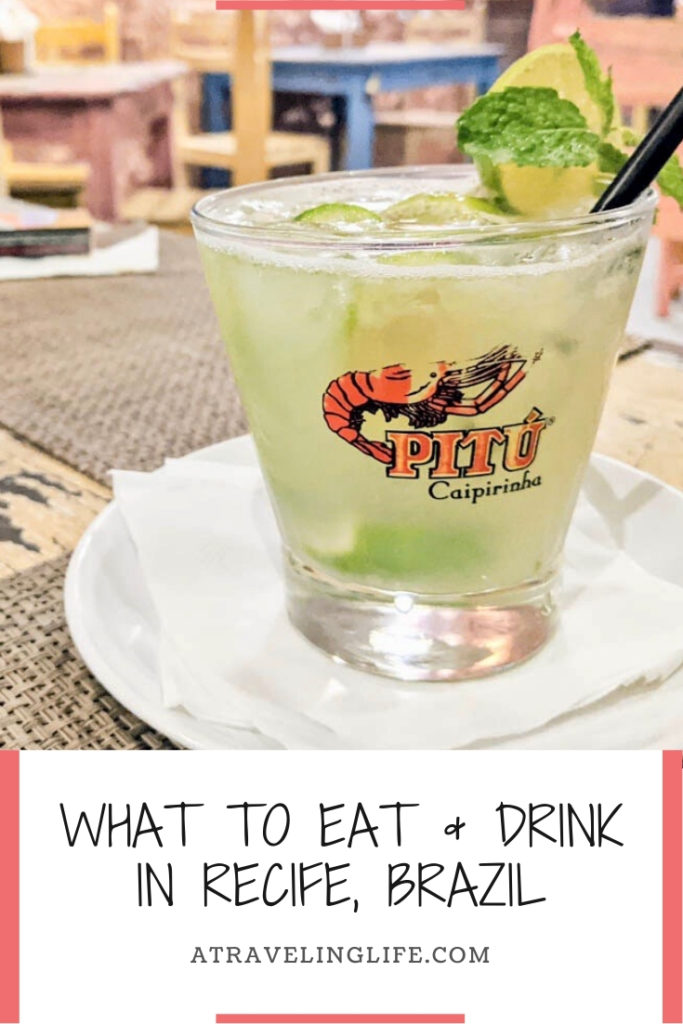 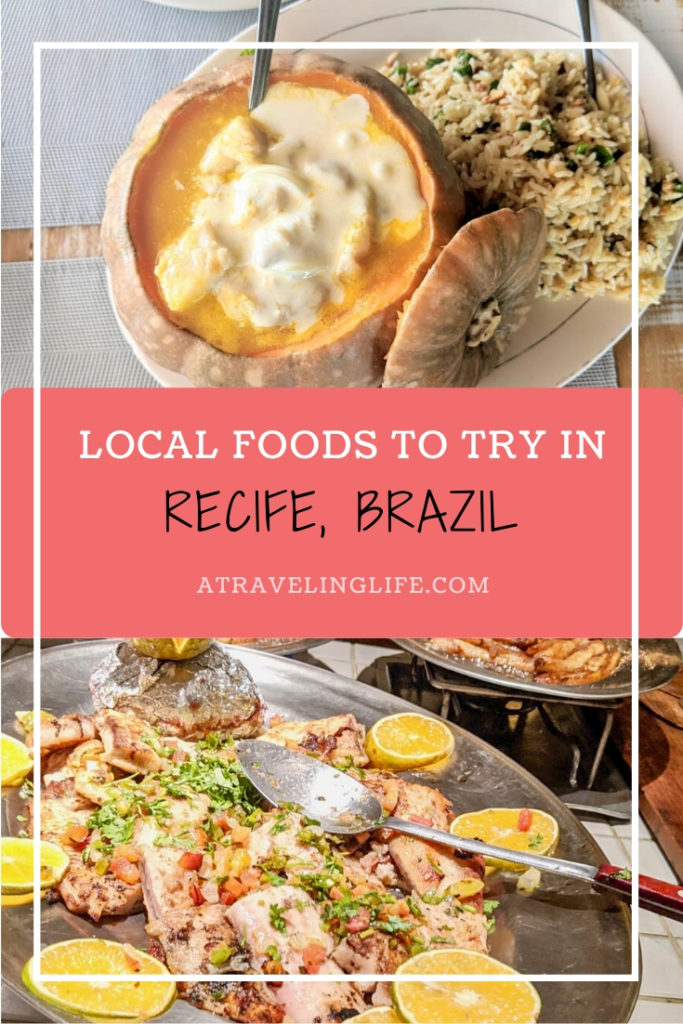 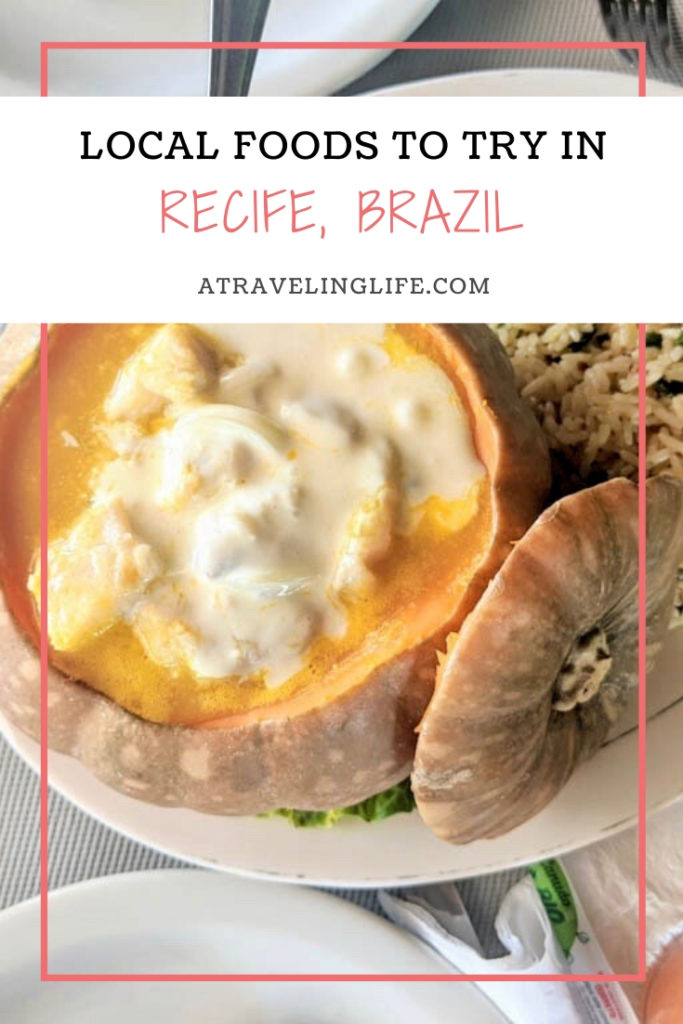 I love Brazilian food
I live in A USA for 17 years and I am from Porto A legre!!!!