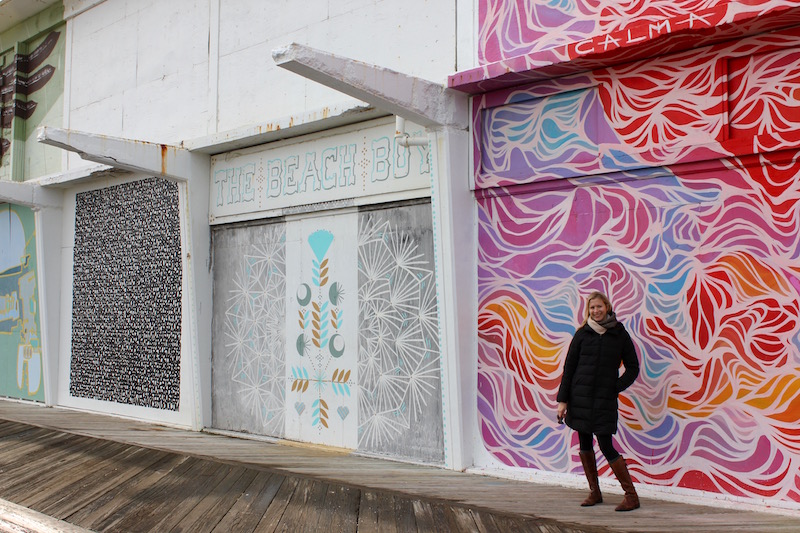 2017 was one of my biggest years of travel yet. I visited a few countries for the second time – Colombia, Guatemala and Portugal – went to two European countries for the first time – Spain and Poland – and stopped by a few islands I’ve never visited before – Antigua, St. Martin and Madeira.

I also saw a lot of the U.S. including three new states – Indiana, Wisconsin and Minnesota – and a few destinations that have become favorites including Asheville, N.C., Lake Placid, N.Y., Jekyll Island, G.A. and Asbury Park, N.J.

It was a big year personally too. I turned 40 while crossing the Atlantic Ocean on the Nomad Cruise. Not only did I survive that milestone birthday, I have no plans of slowing down! 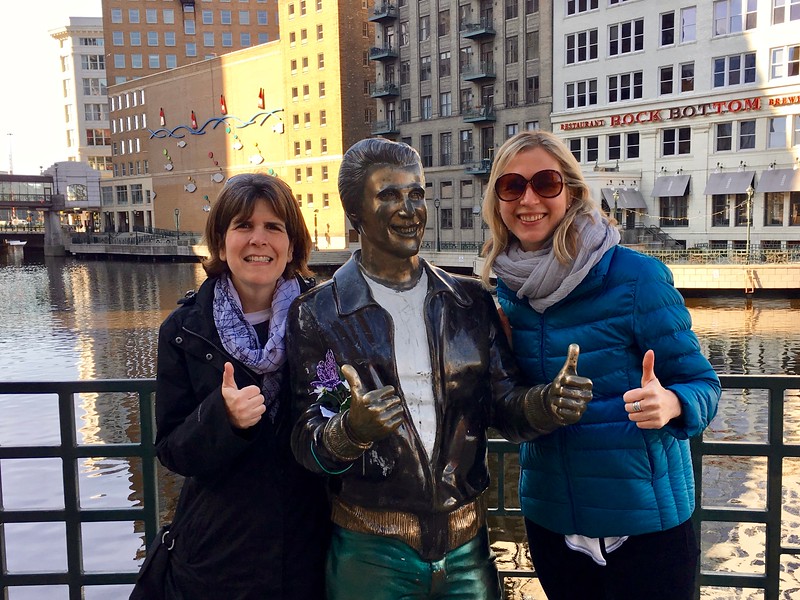 My friend Kelly and I hung out with the Bronze Fonz in Milwaukee.

In January I made two trips to New York City – the first time I met up with my college friends for a night, and the second time, I went to the TravMedia International Media Marketplace (IMM) conference and The New York Times Travel Festival.

February was a fairly quiet month. I visited my family in New Jersey and accompanied my parents on a day trip to Hershey, Pennsylvania. I hadn’t been to Hershey since I was in high school – and it was to go to Hershey Park. I enjoyed going back as an adult and getting a chocolate massage at The Spa At The Hotel Hershey (also known as “The Chocolate Spa”).

I spent most of March working here in Boston. But I did take a road trip with my blogger friends Fiona and Kristin to Portsmouth, New Hampshire, during Beer Week. The day we chose was absolutely bitter, but we had the brews to keep us warm.

After having it on my list for years, I finally got to visit Asheville, North Carolina, in April with my good friends that I travel with every year. Immediately following that trip, I set foot in Wisconsin for the first time to attend my third Women in Travel Summit in Milwaukee. Then in late April I left for a week-long press trip to Poland – a “new” country for me –with Visit Poland. We saw all of the major sites in Warsaw and Krakow, and spent a relaxing day up in the mountains. 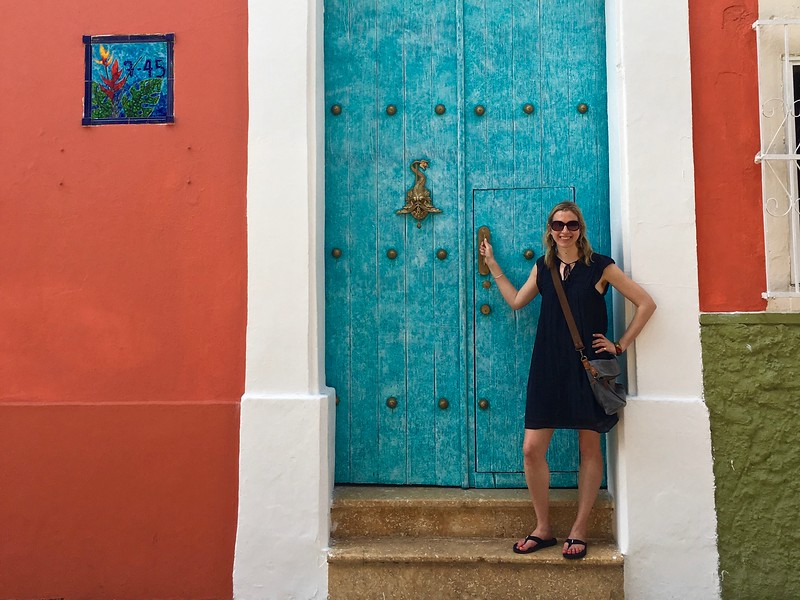 I love wandering around the streets of Cartagena, Colombia.

Soon after returning from Poland in May, I flew to Cartagena, Colombia, one of my all-time favorite destinations. Luckily I have a friend who lives there now, so I got to stay with her and find some new spots. In Cartagena, I boarded the Nomad Cruise with 150 creatives and digital nomads, and sailed across across the Atlantic Ocean to another favorite city of mine, Lisbon, Portugal. The ship made stops in St. Maarten and Antigua, then we had a solid week at sea (no wifi!) before stopping in Funchal on the island of Madeira.

From Lisbon, I headed a few hours north to Porto, where I spent an incredibly relaxing weekend drinking port and strolling around before flying to Barcelona, Spain. In all of my trips to Europe, I somehow had never made it to Spain until this trip.

Being in Barcelona was a good way to start June. I did a lot of walking, and I drank a lot of wine. From there I took the train (actually it the wrong train, but I got there eventually) to Madrid. I got to stay with an old friend, and even though I was pretty tired from traveling for so long, I spent two full days walking around the city to see all of the sights.

I returned to the U.S. completely wiped out, but I didn’t get to relax for long. I joined a group of other bloggers at BlogHouse in Indianapolis – Indiana was another new state for me.

I kicked off July in Denver, Colorado, where I traveled to attend the wedding of a good friend. My dad and I then continued our tradition and attended our 7th Green River Festival together in Greenfield, Massachusetts. 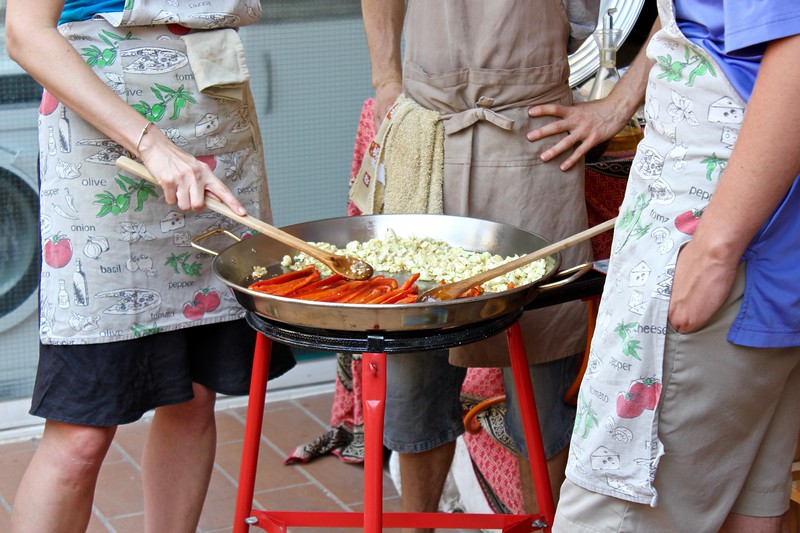 I tried my hand at making paella in Barcelona.

August and September weren’t quite as exciting as the previous months. I really needed to slow down and focus on work, though, so I stayed put in Boston and had some fun around town. I did get away to spend a rainy Labor Day weekend in Lake Placid, New York. I was there as a guest of the Golden Arrow, a gorgeous eco lodge that sits right on Mirror Lake.

I definitely made the most of the month of October. I got together with two of my college friends in Sleepy Hollow, New York, where one of them lives. A highlight of the weekend was touring Kykuit, a former summer home of the Rockefeller family.

Later in the month, I made whirlwind trip to through the south. I spent a few nights with a friend in Charleston, South Carolina, then I drove to Jekyll Island, Georgia, for a two-night stay at the Holiday Inn Resort Jekyll Island with friend and fellow blogger Erin of 10 Miles Behind Me,  and then I stopped in Savannah for a night to attend my Boston friend’s bachelorette party.

In November I spent a week in Guatemala with Ryan of GoodTrip Tours, checking out some cultural immersion activities that will be part of his future tours there. Right after I got back, I drove from my parents’ house in New Jersey to New York City to attend the first day of the 2017 Travel+Social Good Global Summit.

After getting back to Boston, I embarked on a road trip to Western Massachusetts with my friend and fellow blogger Vicky of Buddy the Traveling Monkey. Not surprisingly, after all that running around, I spent about two weeks sick in bed.

In December I made my first trip to Minnesota, which is not a place many tourists head that time of year. I reunited with two of my friends from study abroad in Minneapolis, where one of them lives with her family, and we spent a lot of time drinking wine and catching up.

I also spent the holidays with my family in New Jersey. On the way there I stopped at the Jersey Shore for a weekend. Erin and I explored the towns of Asbury Park and Red Bank – two places I’ve never been before but that I hope to get back to in the summer. 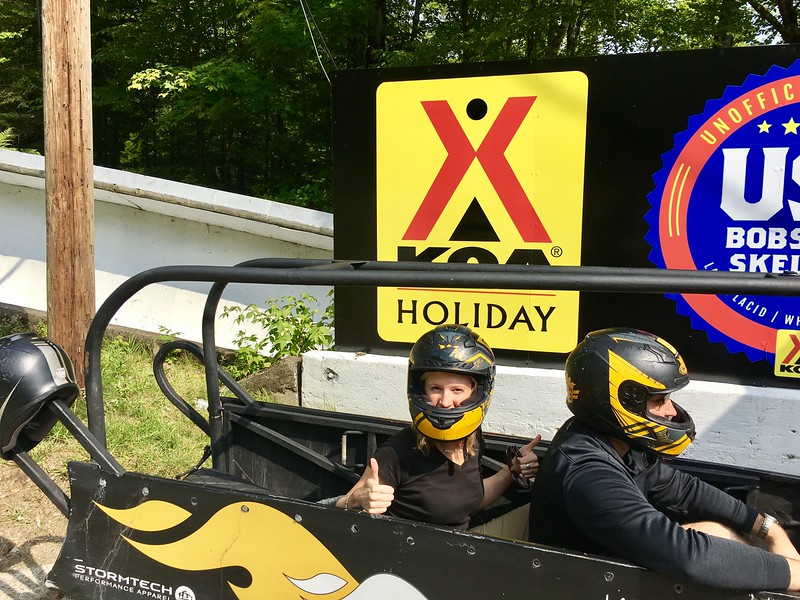 I went bobsledding in Lake Placid!

So far I’ve been trapped indoors for most of 2018, hiding out from the snow and sub-zero temperatures here in Boston. But – fingers crossed – I’ll be able to get to Miami next weekend to visit a friend (I had to reschedule the flight I was supposed to take the day the nor’easter hit this week). At the end of the month, I’ll check out the IMM conference and The New York Times Travel Festival again in New York City. I’m also thinking about taking a bigger trip later in the year – to New Zealand to see friends or back to India.

Here at home I want to check off more items on my hometown bucket list, since 2018 marks my 10th year of living in Boston.

Are you planning your travels for the coming  year year? My friends Alex and Bell of Wanderlust Marriage recommend visiting these five destinations in 2018.

Banner image: I was really impressed by the street art scene in Asbury Park, New Jersey.