Manor on Golden Pond Review: Getting in the Christmas Spirit 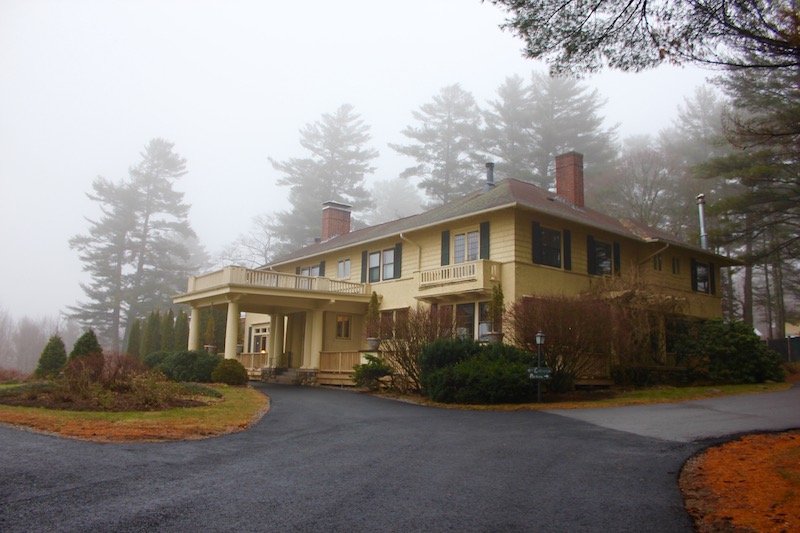 Are you looking for an elegant bed and breakfast in New Hampshire’s Lakes Region? If so check out my Manor on Golden Pond review!

When I pulled out of Boston last Friday afternoon to make the two-hour drive north on 93 to the small town of Holderness, in the heart of New Hampshire’s Lakes Region, it didn’t really feel like Christmas was less than two weeks away. After all, it was sunny and near 60 degrees, and just the weekend before, I returned from two weeks in Peru, where I was sporting tank tops and flip flops.

But by the time I turned up the Manor on Golden Pond’s long driveway, it felt like winter had finally arrived – the temperature had dropped and the fog had rolled in, and I couldn’t see much beyond the large yellow house perched on the hill. And it didn’t take long to get in the holiday spirit after I entered the Manor’s warm and inviting entryway, with its wood-beamed ceiling, soft lighting, beautifully decorated Christmas tree, and large fireplace topped with festive greens, bows, and balls.

The woman at the reception desk quickly ushered me to my room in the Manor Wing on the first floor. I almost squealed with delight when I opened the door to the Yorkshire – it was a far cry from the $7 dorm beds I had slept in during my travels in Peru. The suite was light, bright and covered with blue toile wallpaper, which gave it a very romantic feel (I appreciated it, even though this was a solo getaway!). The suite was divided into two areas – a seating area was on the right, with a loveseat, chair, and fireplace, and the bedroom, with a large four-poster bed, was to the left.

Hiking was, unfortunately, out of the question that afternoon, given the gloomy weather. So I enjoyed a glass of hot apple cider in the cozy library before heading out to explore Meredith, a popular tourist town at the end of Lake Winnipesaukee about 15 minutes down the road. The Lakes Region sees most of its visitors during warmer months – April through October – so most of the stores in the Mill Falls Marketplace were nearly vacant, and I was able to quickly check a few items off my Christmas gift list.

I survived the dark, foggy drive back to the Manor with plenty of time to spare before dinner. Even though my original plans were to catch up on some work, I opted instead for a long soak in the room’s large Jacuzzi tub, accompanied by a few glasses of wine. I was so comfortable that I was almost late for dinner and needless to say, I accomplished nothing productive that evening.

When making my reservation, I had been pleasantly surprised to see on the Manor’s website that the restaurant offers a vegan tasting menu. I was intrigued, especially given that meat and potatoes are definitely more popular fare in New Hampshire, and the Manor’s co-owner, Mary Ellen Shields, was kind enough to accommodate my request.

At 7:30 p.m. I arrived in the Manor’s intimate Van Horn Dining Room and for the next two hours I was treated to seven – SEVEN – vegan courses, each one better than the next, all of which I happily devoured. Starting with carrot ginger bisque and ending with a trio of mulled cider, maple and gingerbread spice sorbet, each dish was fresh and perfectly seasoned, along with being elegantly plated. I am fairly certain I will remember this meal for a long time.

With a belly full of vegetables, I slept quite deeply in the suite’s soft bed. When I roused after 8 a.m. – which is sleeping late for me! – I was pleasantly surprised to see that the sun had come out. I discovered that I actually had a beautiful view of Squam Lake and the surrounding hills from my small balcony, which had been obscured by the fog the day before.

I finally made an appearance in the dining room for breakfast at 9 a.m. I was offered coffee or tea and could choose fruit and pastries from a small buffet. The breakfast decision was a difficult one since there were so many tempting options, but I went with the cranberry oat pancakes with maple syrup, and I was very happy with my decision.

After breakfast I decided to take advantage of the good wifi in the suite before heading out to explore more of the area. Mary Ellen’s husband, Brian, walked me through the various activities that are available nearby during this time of year.

I decided on one of two hikes he recommended but then took a wrong turn leaving the Manor and found myself back in Meredith. Since I was right there, I just had to go shopping again (right?). This time, I treated myself to some Christmas gifts – trail runners and a bottle of wine from a local vineyard – followed by a leisurely lunch and stroll along the lake.

Back at the Manor, Brian generously accommodated my request for a late checkout, and by 4 p.m., I finally forced myself to depart – refreshed and ready for the holiday season.

Did my Manor on Golden Pond review encourage you to check it out?

What to Do in Meredith, New Hampshire

This Manor on Golden Pond review was provided in exchange for one night of accommodations, thanks to a collaboration with Select Registry (for which I also visited the Deerfield Inn and Hawthorn Inn). All opinions are my own.

1 thought on “Manor on Golden Pond Review: Getting in the Christmas Spirit”