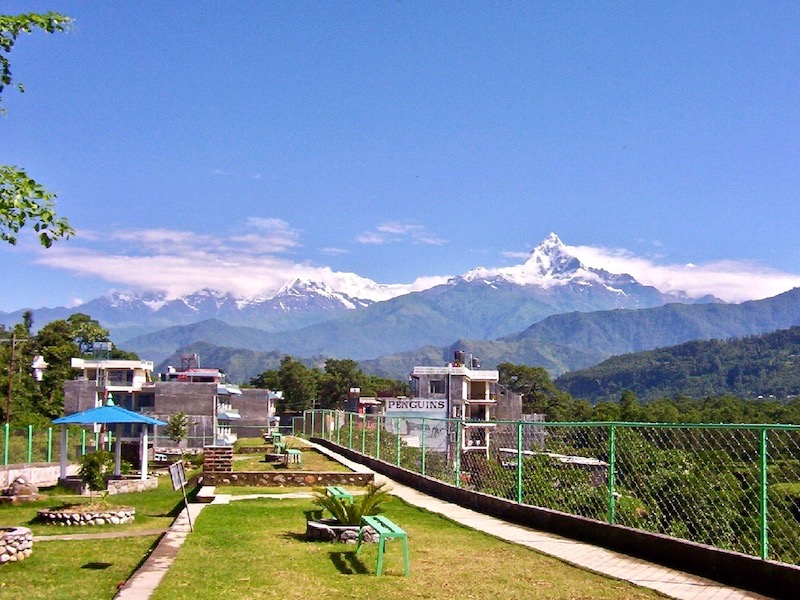 This is the second post in a series where I’m sharing my photos and memories of the summer I spent volunteering in Nepal. My first post describes my arrival in Kathamandu, and this post is about Pokhara, the city where I lived.

Following my Hands for Help orientation in Kathmandu, one of the organization’s co-founders, Badri, accompanied me on the scariest bus ride of my life about 200km west to Pokhara, the country’s second-largest city, where I spent the remainder of the summer. 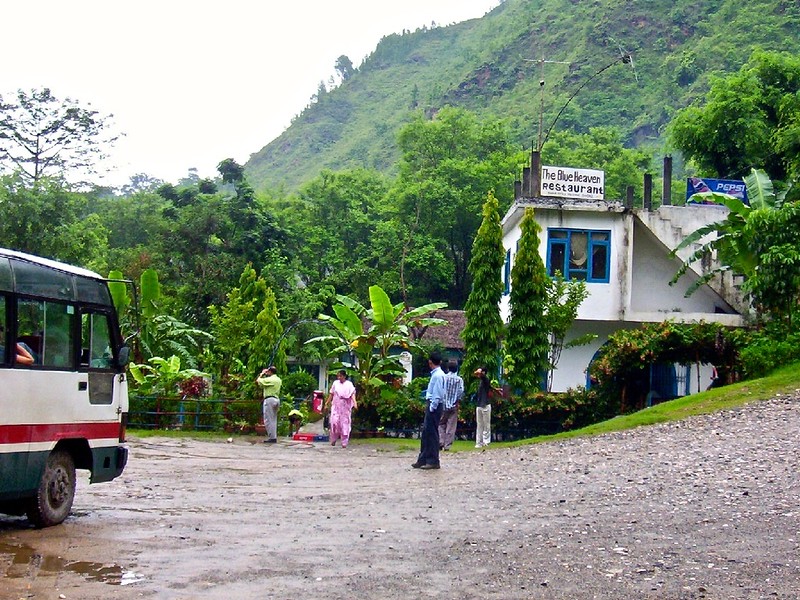 a rest stop along the highway

For about six hours, we careened around tight curves on the narrow Prithvi “Highway” (really just a dirt road), often coming face-to-face with trucks coming in the other direction, resulting in some impressive – and terrifying – maneuvering. I spent the entire ride just trying not to look at the sharp drop-off to the river far below. (Sidenote: This highway was actually washed out during the monsoons that summer, so I had to fly back to Kathmandu at the end of my placement.)

I breathed a sigh of relief when we finally arrived in Pokhara. Badri delivered me to the home of my host family, the Pants, and made sure I was settled before making the return trip to Kathmandu the following morning.

A Summer in Pokhara

Since monsoon season lasts from June to August, it wasn’t the ideal time to visit Nepal (fall is the high season). But as a full-time graduate student, it was the only time of year that gave me the freedom to volunteer for an extended period of time on the other side of the world. Mornings were usually clear, but heavy clouds rolled in by mid-morning and hung over the valley for the remainder of the day. There was typically a downpour every day around 3 p.m., but it failed to provide any relief from the oppressive heat and humidity.

The World Peace Pagoda, on a mountain overlooking Phewa Lake, was built by Japanese Buddhists.

Unfortunately, the daily rains often obscured the jagged, snow-covered peaks that tower over the green, rolling hills of Pokhara Valley, including the most sacred mountain, the 23,000-ft. Machhapuchchhre – it is commonly referred to as “Fish Tail,” since that’s what the summit’s silhouette resembles from certain viewpoints. Considered particularly sacred to the god Shiva, it is off-limits to climbers. 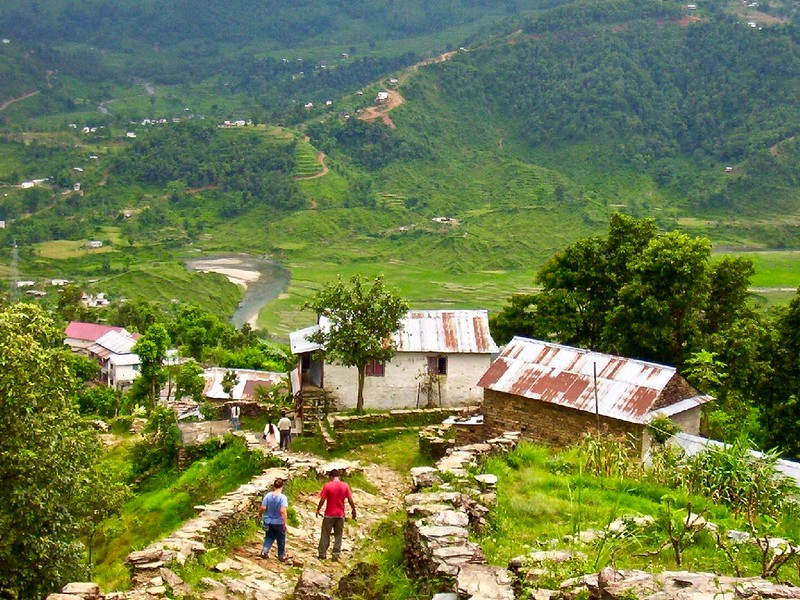 hiking down from the World Peace Pagoda

Despite the weather, Pokhara was a very pleasant place to spend a summer – I always felt comfortable walking around and interacting with locals. The city has the highest cost of living in the country, benefitting from the many trekkers who pass through on the way to and from the Annapurna Circuit, and I took advantage of its amenities.

my neighborhood shops in Pokhara

The Pants lived in a relatively quiet residential neighborhood, but it was only a 20-minute or so walk to the center of town, where I shopped for snacks and toiletries after school. On weekends and school holidays, I ventured a little further out to the tourist spots surrounding the peaceful Phewa Lake – Internet cafes, souvenir and clothing shops, and Western restaurants – as much as I enjoyed dhal bhat, it was definitely nice to have a veggie burger from time to time.

There was no alcohol in the Pants’ home, so beer was another treat that I enjoyed at the lake-side restaurants. However, bars were non-existent, so to entertain ourselves one evening, a few friends and I rented the movie “Casino” on VHS (!) from a shop and watched it inside of a small, dark room upstairs. 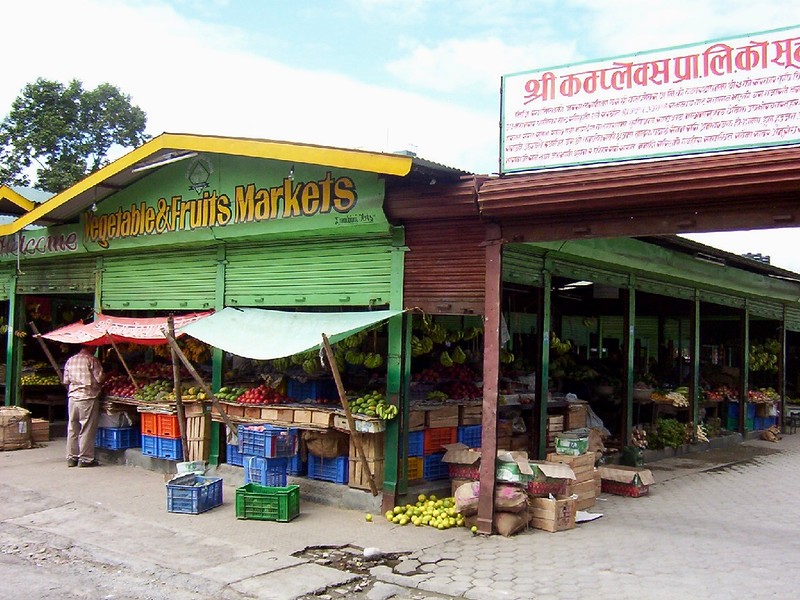 I only tried to go trekking once – it was supposed to be just an overnight hike in the surrounding foothills with another American, Amy, a Peace Corps volunteer who also taught at my school. We didn’t get very far, though, before a stern Maoist solider with a large gun stopped us and demanded a bribe of $40 in exchange for proceeding past his post. I remember being tempted to pay, but, after some debate, we decided the right thing to do was to turn around – a decision that unfortunately meant getting caught in torrential downpours, so the descent was extremely slow and challenging on the slippery rocks. From then on, we stuck to day hikes closer to town, like the one to the World Peace Pagoda. 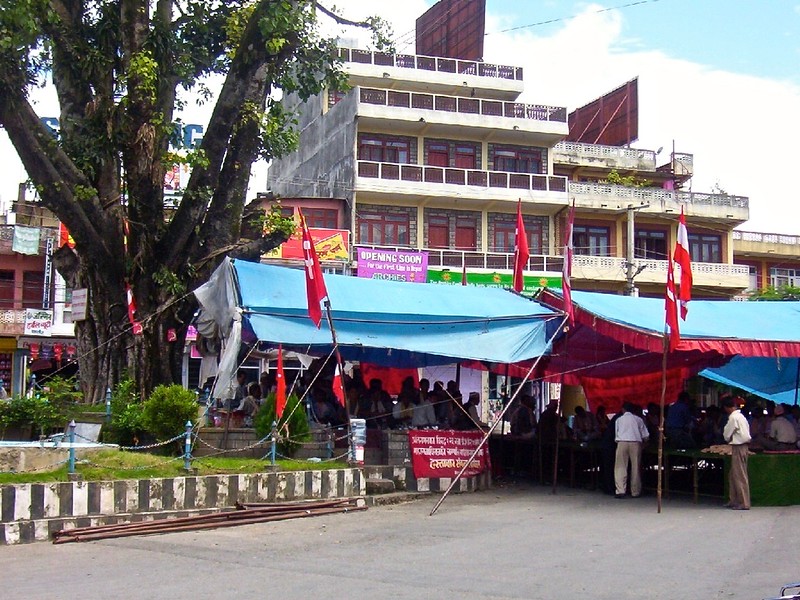 Maoist gathering in downtown Pokhara – I was in Nepal during the 11-year civil war that killed about 15,000 people.

One of my favorite memories of Pokhara was during the end of my stay when “Fish Tail” finally revealed itself to me one evening – fortunately, I had time to grab my camera and run to a small park on the corner near the school to snap a photo before the clouds returned. I think it was worth the wait.

Read my recommendations on how to support Nepal earthquake relief efforts.

Dispatch from Nepal: Interview with Beau Miller of Aythos

The Henry Hotel: A Peaceful Retreat in the...