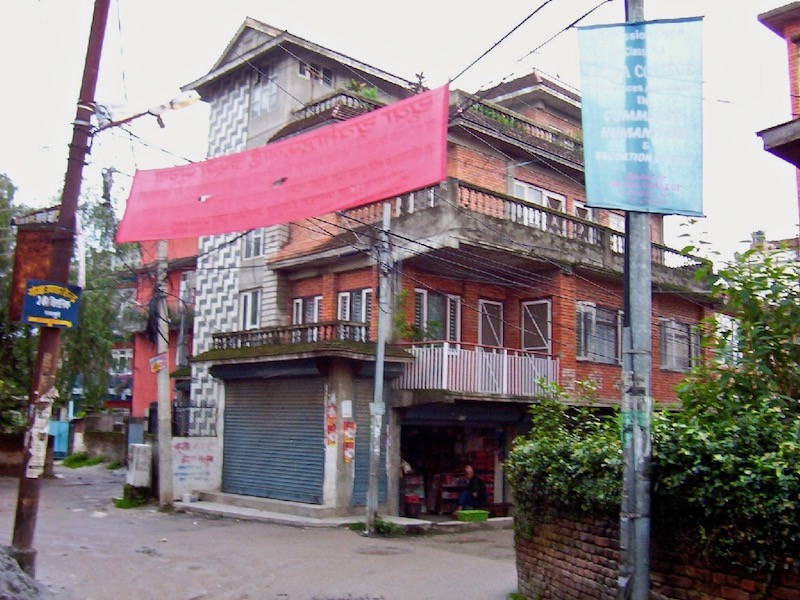 It was one week ago today that disaster struck the beautiful country of Nepal, which inspired me to share some memories of the time I spent there as a volunteer more than 10 years ago. This first post focuses on the first few days in Kathmandu.

A graduate school classmate and I spent a summer volunteering in Nepal with Hands for Help Nepal way back in 2003, a whole year before “Thefacebook” came to be in Mark Zuckerburg’s dorm room. Since my photos of that special time in my life have just been sitting in a weighty scrapbook on my living room shelf and have never seen the light of day on social media, I thought I’d start sharing a few of the digital files that I do have to shine a little light on the Nepal that I know and love. (Needless to say, the photo quality is not the best, as these images were taken on film – remember film? – and then converted.) 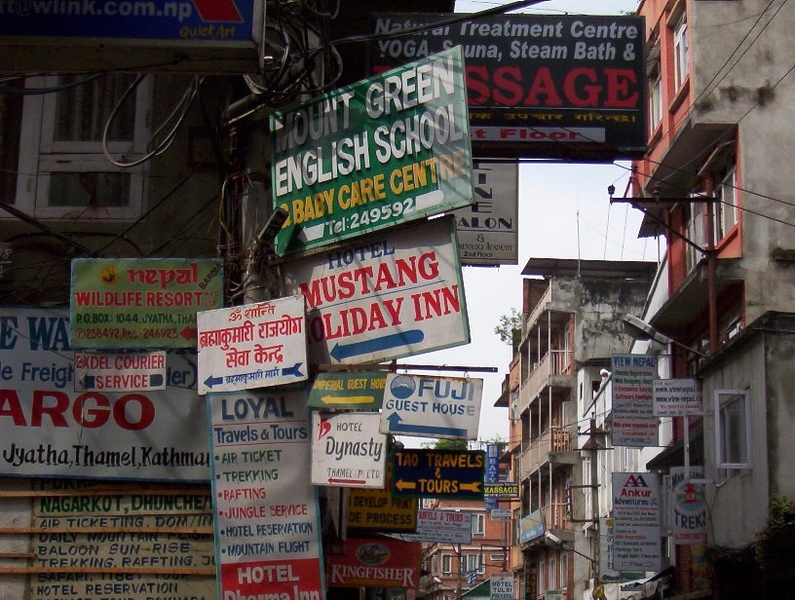 a chaotic corner of Thamel

My first memory of Nepal was arriving at Tribhuvan International Airport and getting hit with a blast of heat as I stepped off the plane and onto the tarmac. My classmate and I made our way through the tiny terminal, which is just a nondescript one-story building jam-packed with travelers, and negotiated baggage claim and customs – I remember long lines and lots of guards with big guns.

Exiting the front of the airport, unofficial cabbies swarmed around us, jostling to grab our bags and shouting their competing offers as we tried to scan the parking lot for our ride – sweat started seeping through my shirt as my eyes struggled to adjust to the bright sunlight. Luckily, Hands for Help Nepal’s then-Executive Director, Anil Bhusal, spotted us pretty quickly – needless to say, as two blonde girls, we were easy to find.

I remember this being a particularly quiet corner of the city.

We threw our bags in the back of his tiny car and hopped into the back seat – breathing a sigh of relief as we closed the car doors and shut out the chaos of the parking lot. As we made our way through the narrow dirt roads to Hands for Help’s headquarters, I stared out the window at the blur of color, as Anil dodged the crowds and cows. (There were cows EVERYWHERE!)

We ate lunch at this lovely rooftop restaurant in Thamel.

We were so happy – and exhausted – when we finally arrived at Hands for Help’s office. It doubles as a guest house, and it’s where we would spend a few days before heading to our volunteer assignments in Pokhara. To help us adjust to life in Nepal, Anil and his partner, Badri Rai, put us through a very thorough training program. We spent a few days sitting in an improvised classroom getting an overview of the country’s culture, history and politics, and as well as very important instruction on how to eat dal bhat with our hands and use squat toilets. 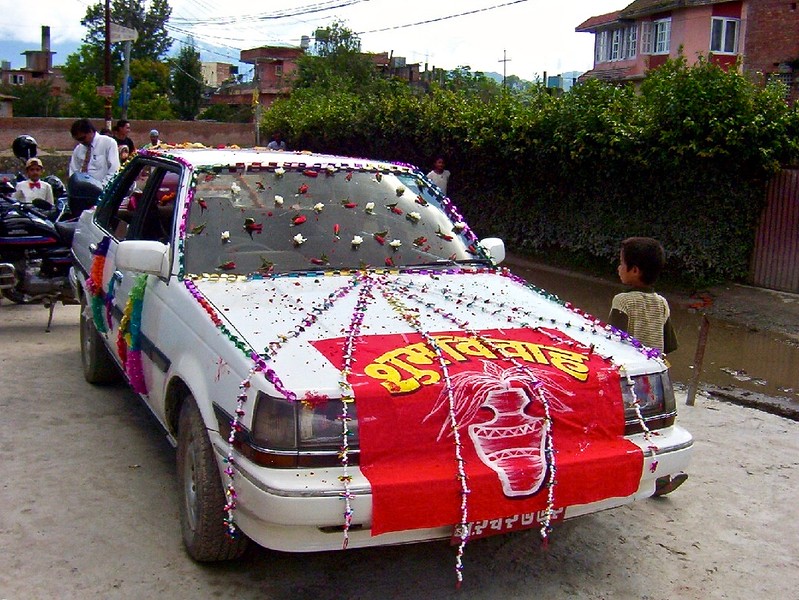 We stumbled upon wedding preparations, which was a fun surprise.

In our down time, my friend and I wandered around chaotic Thamel, Kathmandu’s hip tourist and trekker mecca. At that point we weren’t really immersing ourselves in the culture, although walking through alleys where we had to dodge stray dogs and piles of garbage seemed like quite an adventure. We mainly chilled out at Internet cafes, browsed North Face knock-offs, and treated ourselves to Western delicacies like spaghetti and pizza. 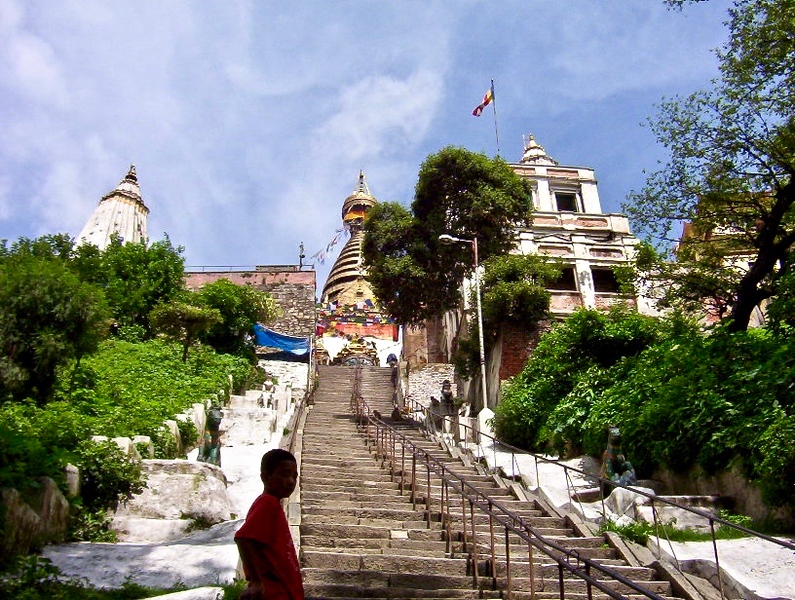 I took this photo on the way up the steep staircase to Swayambhunath, also known as the “monkey temple” due to its pesky inhabitants

We also took time to be tourists and check out just a few of the 2,700 religious sites scattered throughout the Kathmandu Valley including Swayambhunath, the Monkey Temple. Dating back to the 5th century, the soaring stupa it is an important site for Tibetan Buddhists and can be seen from miles around. Unfortunately, our visit coincided with that of one the princesses of Bhutan, and as a result, were ushered into a one-room structure and not allowed to take photos. 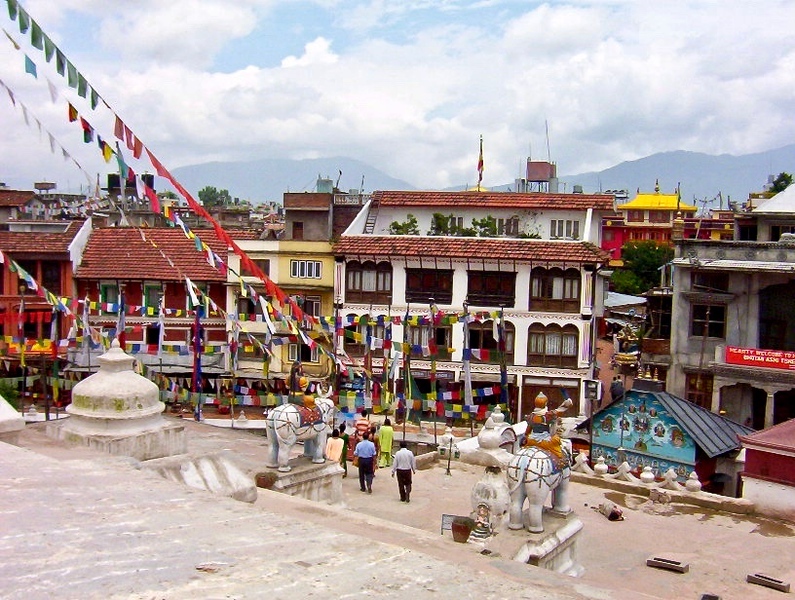 This is a view from Boudhanath, one of the largest stupas in the world. It dates back to least the 8th century, and fortunately, only received minor damage in the earthquake.

We also paid a visit to Boudhanath, the most important Tibetan Buddhist holy site outside of Tibet. Buddhists are actually the second-largest religious group in Nepal – 80% of Nepalis are Hindu. Although there is no official state religion, Nepal’s constitution declares it a “Hindu Kingdom.”

The smoke in the photo is from a funeral pyre.

Probably the most fascinating of all the sites we visited in Kathmandu was the 1500-year-old Pashupatinath Temple. Located on the banks of the Bagmati River, it’s one of the most sacred Hindu temples in the country and a popular cremation site. As non-Hindus, we were not allowed to visit the temple, but we were able to climb a hill above and witness the  goings-on from up above.

This was my first exposure to Hindu religion and culture, and fortunately, I got to learn much more about the religion and its influence on daily life while living with my host family in Pokhara, which I’ll talk more about in the next post.

Read my recommendations on how to support Nepal earthquake relief efforts.

Dispatch from Nepal: Interview with Beau Miller of Aythos

The Henry Hotel: A Peaceful Retreat in the...