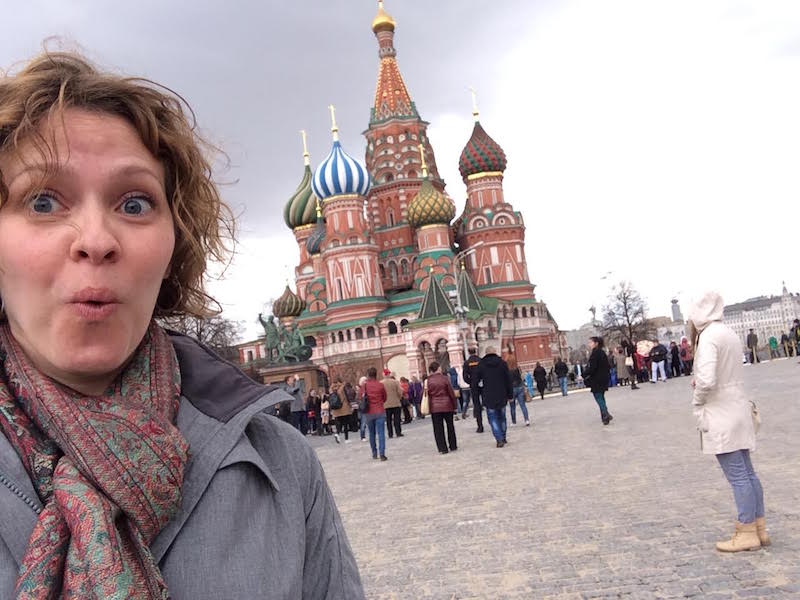 My cousin introduced me to her high school friend, Trish Collins, through Facebook because of our mutual travel obsession, and since then, I’ve enjoyed following her frequent trips around the globe. She’ll be staying put in the coming year, though, since she’ll be welcoming her first child (now known as “#thebump”) this fall. 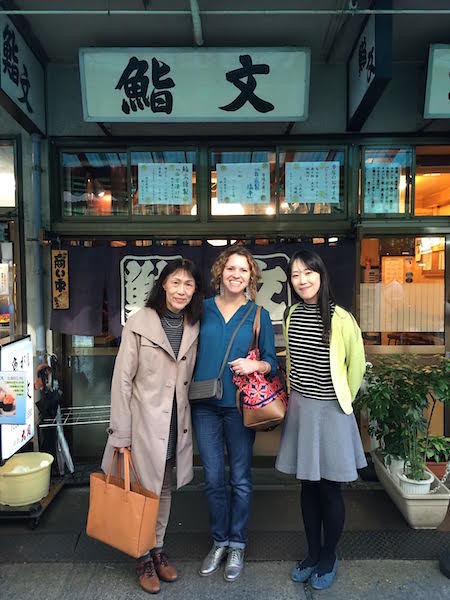 Trish with Yuko, her my college roommate, and Yuko’s mom in Tsukiji Fish Market in Tokyo

Since I was a kid, my parents exposed me to a lot of the U.S. (we were devoted roadtrippers) and gave me my first small taste of international travel (Canada, St. Maarten and the BVIs).

I always loved language, and for my freshman year in college, I requested an international roommate. What better way to learn a language and culture than to share a room with someone? Sophomore year, Yuko invited me to visit Japan, and my world opened. Since then, I sought more and more opportunities to make the world smaller. I transferred to SCAD (Savannah College of Art and Design in Savannah, GA), which had students from all 50 states and more than 80 countries (now it’s 100 countries!). My network of diverse friendships began to grow. My roommates were from Oklahoma and South Africa, and my closest friends were from Ecuador, Uganda, Denver, Italy, Japan, India, etc.

After graduating with my BFA in Painting, I began work as a SCAD Admission Rep., which led me to travel all across the U.S. All my skymiles and hotel points were saved to travel internationally. First to a friends’ wedding in Ecuador, then for a homestay/language school in Italy, then vacations with my parents in Spain, Ireland and Italy. I had a brief stint working for a boarding school as an art teacher, then found my way into the world of boarding school admission, and finally, international admission for a boarding school in California.

Turn on the news, and all you see is fear and hatred. Travel dissolves ignorance. It shows you that all humans (OK, perhaps MOST humans… 99.9%) share common core values. We may not express things or interpret things the same way, but that’s what makes the world so dynamic. Homogeneity is the worst possible outcome of travel, the Internet, etc. Having a Starbucks on every street corner in every country in the world is my worst nightmare. (Especially once you start tasting each country’s unique spin on coffee and tea! Helloooooo Vietnam, Colombia, Italy, Turkey!) 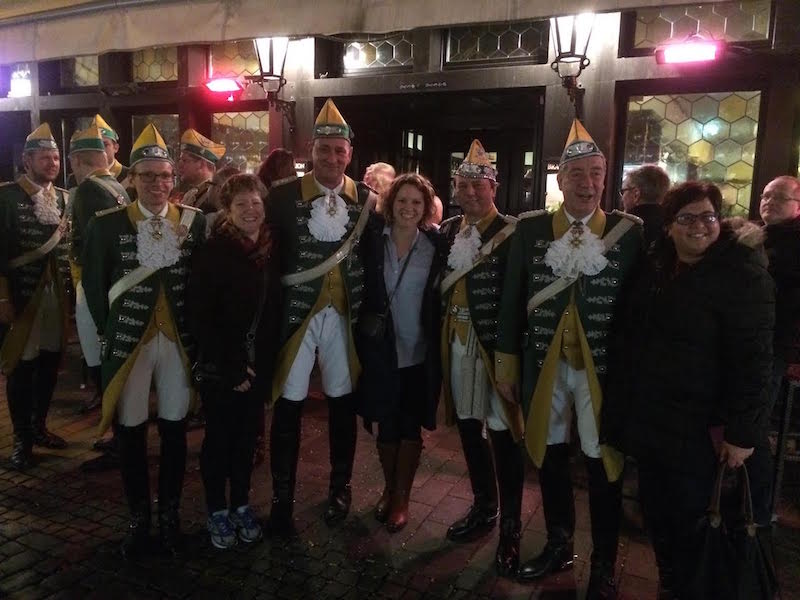 Trish at Carnival in Germany

How did you first get the travel bug?

My dad was in the Army, so family roadtrips had timed rest stops. As in: you have three minutes. My dad would fill the gas while my mom took the dog out to the grass, my sister and I would run in and one would get drinks/snacks while the other used the facilities, then switch. Next one of us would get the dog, and we’d get back in the van. My parents would run in and out and we were back on the road. I didn’t see much beyond the eastern half of the U.S. (we lived in Pennsylvania, and our furthest destination was Texas), but it was a start. It showed me how much fun both the journey and the destination could hold, and it just opened my eyes to see beyond my comfort zone of the small town where both my parents grew up.

Visiting Japan with my roommate Yuko absolutely changed the course of my life. Sure, in our dorm I’d learned to use chopsticks and say a few words. We watched a Japanese TV series her mom mailed on VHS tapes, and I sang a few Japanese songs… but that was still within “my world.”

It’s easy for Americans to feel like we live in the center of the universe. We aren’t surrounded geographically by other languages and cultures. We already speak English, the most useful language for travel. Sure, in big U.S. cities other languages and cultures are mixed in, but in my own little “whitebread” world, I somehow missed them. Japan taught me how young America is. I learned about Japanese respect, tradition, religion, transportation, theater, history, and perhaps best of all, FOOD. Food brings everyone together! 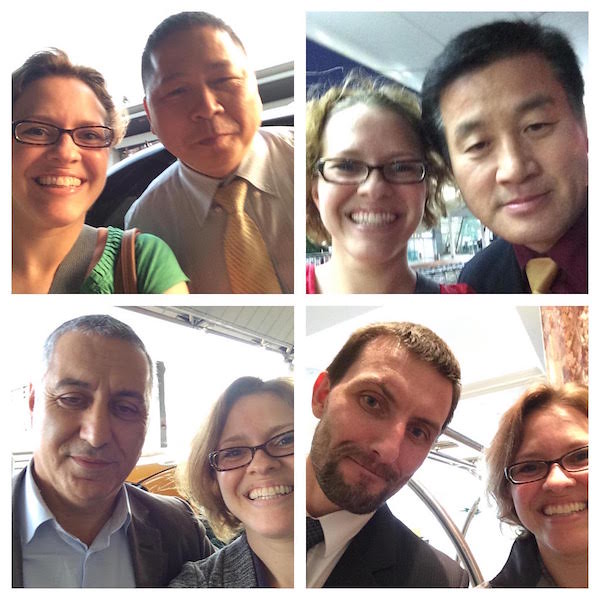 The most common question I hear is, “Aren’t you scared to fly all the time?” But on the other side of the spectrum is, “You’re so lucky! I would LOVE to travel for my job.” The first answer is No. The world is NOT a scary place. The news is scary, but the world is full of good people and beauty and small kindnesses. You can look for the bad and see it easily, but I choose to look for the good.

I also think of myself as an ambassador for the U.S. Everyone, every time they travel, is an ambassador for their home country. Meet only one person from any place and you’ll find that’s what you think of that place. So I try to do as Ghandi said, “Be the change you wish to see in the world.” Right now, Turkey is in the U.S. news a lot, for some very scary reasons. But I think Turkish people were the absolute friendliest in all of the 18 countries I visited last school year. If you lived outside the U.S. and watched the news about America, I bet you’d be afraid to visit here, too.

The second answer is Yes. I do have the best job ever. But it’s not easy. And I’m not sightseeing, I’m working. (Though I’m trying to squeeze in some drive-by tourism wherever possible!) Spending a month abroad is brutal on your body. Jetlag, constantly changing time zones, dirty laundry, the “hurry up and wait” of traffic and airports and immigration, sleep deprivation, new languages every three days, new currency every three days, new cultures and faux pas to be aware of every three days, unknown food reactions… not to mention homesickness and just general exhaustion caused by not having any days off for weeks. But again, you have to look past that and find excitement in meeting new people (even when it’s just taxi drivers and hotel staff), learning new things about the world (about language, culture, food), and most of all, learning new things about yourself.

You’d think after 30+ years you have a good idea of who you are… but this job is really expanding my views not just of the globe, but of myself. (For better and for worse. The best way to learn your limitations is to travel!) And if you’re traveling for FUN, not work, remember that. MAKE it fun! Don’t over-schedule yourself. Allow some time to sit in a cafe and soak in the culture. Force yourself to talk to strangers! Try the food! DON’T set foot in a Starbucks (or any other American chain)! 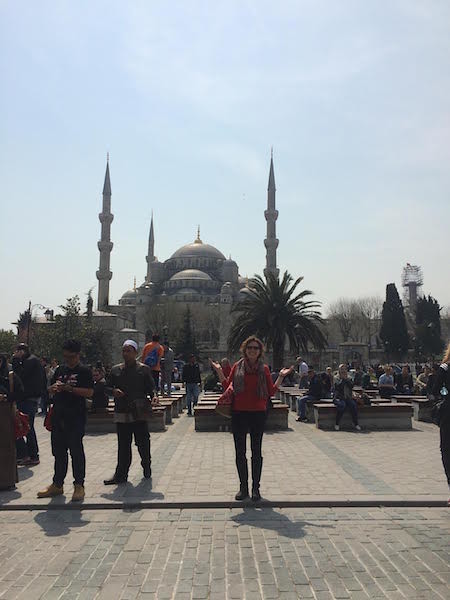 BOOK IT. Don’t think: can I afford it? You can. There are a million sites and books that can teach you how to travel on a shoestring. Don’t think: do I have time? No, you don’t. You never will. Which is why you just have to put it on your calendar and allow the rest of life to fit in around it. Don’t think: but what about…? However that question ends for you, it’s likely about a situation or position where you feel secure, comfortable or in control.

Neal Donald Walsch said, “Life begins at the end of your comfort zone.” Give up control. It’s the only way to learn and grow.

Is there anything else you’d like us to know?

For baby boy’s first flight, he’ll be just a few weeks old. (Due date is October 18.) We’re flying the day after Thanksgiving to Brooklyn, N.Y., for my best friend’s wedding, then heading to Texas to visit my in-laws.

Beau Miller: How Aythos Responded to the Nepal Earthquake