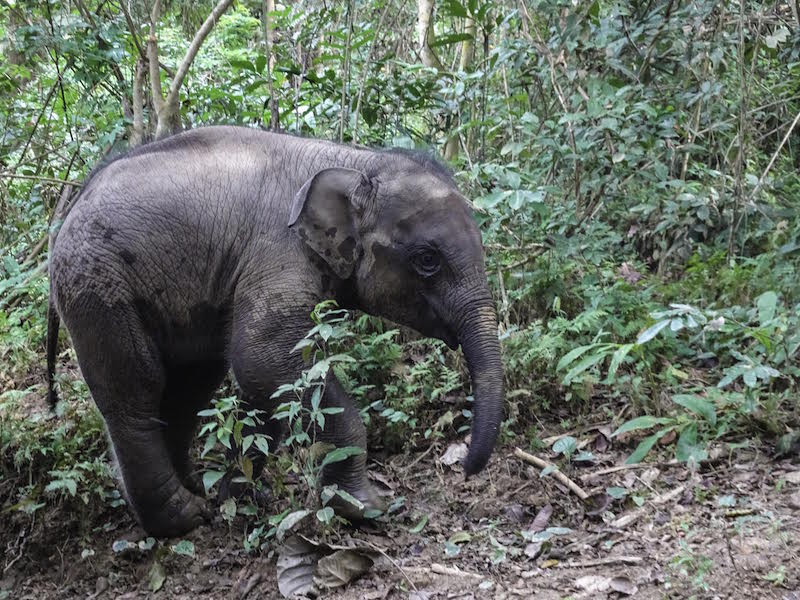 The best places to see elephants in Southeast Asia are sanctuaries that promote education and conservation instead of exploitation.

Inspired by my recent visit to the island of Palawan in the Philippines, where I was lucky enough to swim with whale sharks in a completely natural setting, I wanted to spread the word about other tours, attractions, and experiences that are encouraging positive interactions between humans and nature. So I asked some fellow travel bloggers to share their favorite responsible wildlife encounters from around the world. This is the fourth part of a four-part series.

If you’re looking to have an ethical elephant experience, it’s essential to do your research. Sadly, there are many places that pass themselves off as “sanctuaries” that are more motivated by tourist dollars than what is best for the elephants (It should go without saying but any place that offers elephant riding is definitely NOT ethical.) So if you are looking for where to see elephants in the wild (or close to it) or looking to volunteer with elephants, then check out these recommendations.

Contributed by Erin of Traveling Thru History

Kuala Gandah Elephant Sanctuary is an elephant preserve that has been around since 1989. It provides a place for elephants who are damaging farmland around Malaysia to go and be cared for before they are relocated to different preserves or national parks in the region. Sanctuary staff try to get the elephants moved out within a few months, but some end up staying longer due to illness or injury. The main purpose of the sanctuary is to help and preserve the elephants in Malaysia, since they are on the Critically Endangered list. To do that, they work on educating and making the public aware of the plight of the Malaysian elephants along with ensuring these elephants have a safe place to live once they are relocated. 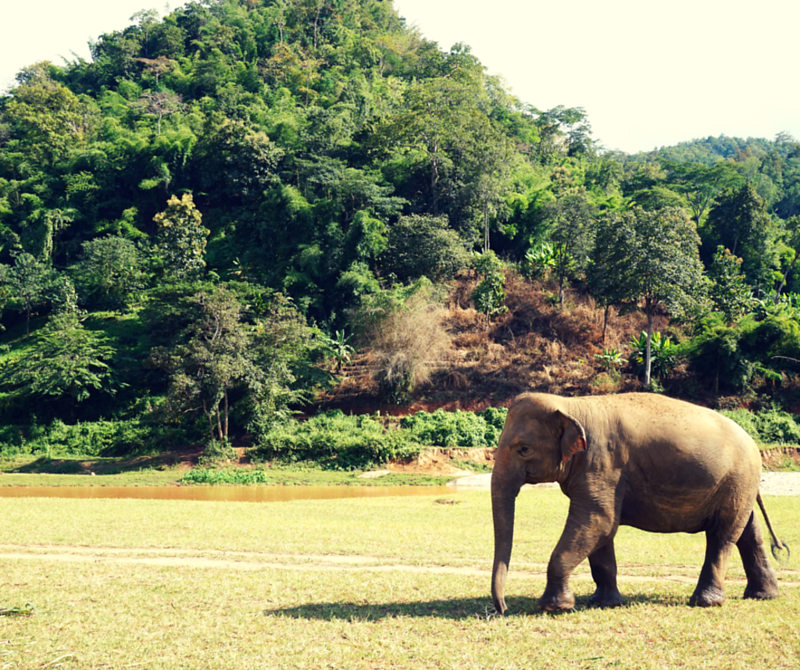 Contributed by Vicky of Buddy The Traveling Monkey

We had heard about Elephant Nature Park before our trip to Thailand through other bloggers. They all spoke so highly about the park and the good things that were being done there for recovering elephants, so we made sure to visit during our stop in Chiang Mai. It was an incredible experience, and one that we’ll never forget. We were able to interact with the elephants by feeding them and splashing them with water while they bathed in the river, but what we loved most was that it was all on the elephants’ terms. If they got bored of us, they simply walked away. At no point were they forced to be near us. There were no chains. There were no ropes. At Elephant Nature Park, the elephants were treated with respect. 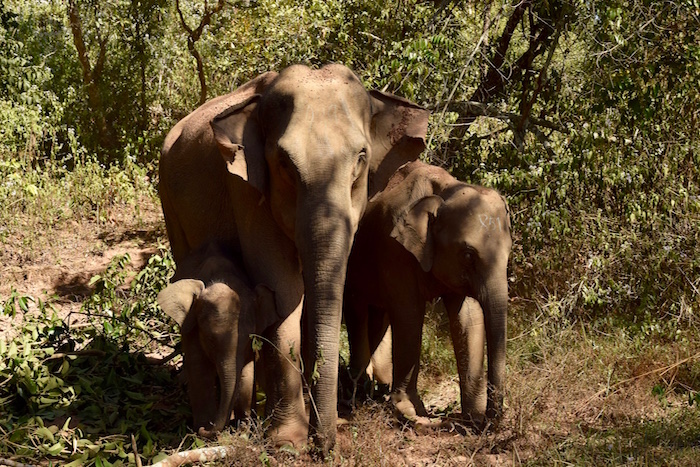 They say “once bitten twice shy.” This has certainly held true for elephants and me. In 2006, unaware of the plight of elephants and the cruelty sometimes involved in elephant tourism (particularly where riding is involved) I rode an elephant. I vowed never again.

During my recent trip to Northern Thailand, I began my search for ethical elephant projects that promoted and protected the welfare of elephants above the bucket-lists of visitors. I struck gold. I spent three days in the mountains of Northern Thailand, in Mae Hong Son, with the wonderful Mahouts Elephant Foundation. Mahouts are a charity that was set up in 2014 with the aim of rescuing elephants from poor-to-appalling conditions in camps, and bringing them and their Mahouts back home to Karen villages and forests to live a free-er life. In a country like Thailand where there are more elephants in captivity than there are in the wild, this is a huge step.

My time at Mahouts involved staying in a Karen village in a rustic homestay, camping in the forest, and walking with the four elephants and their mahouts through the forest. What was wonderful about this experience was not only getting the chance to support the work that Mahouts are doing, but it was clear also who was taking the lead. We were following the elephants, as opposed to making them do things to amuse us. Due to having spent most of their lives in captivity, and them being used to humans, it was safe to be close to the elephants. No riding is offered, no washing the animals is offered – interaction is clearly on the elephants’ terms. That said, these are friendly elephants, particularly Santi the baby, who was not certainly not shy and ran into me with a muddy trunk on more than one occasion! 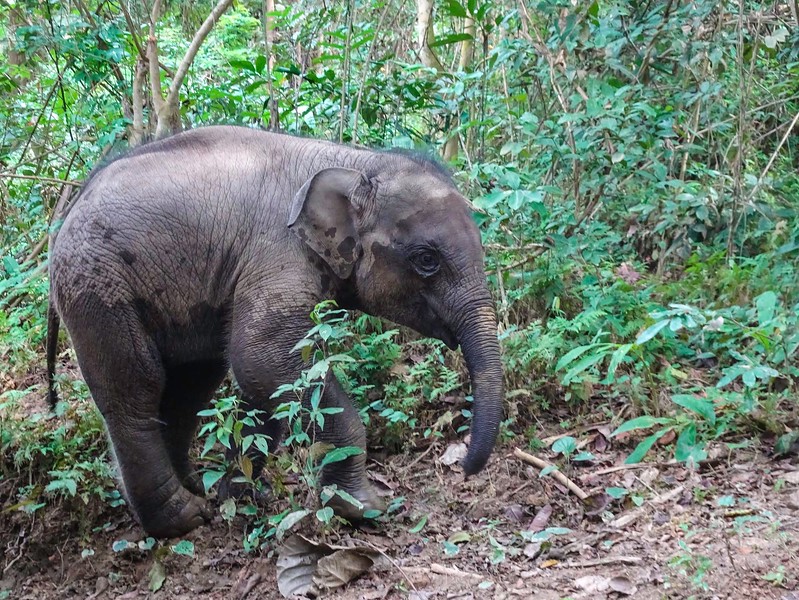 This is the baby, Kit.

With so many elephant tourism options available in Luang Prabang, it was harder than expected to find a responsible one – an organization that really was a sanctuary, offering no riding and caring more about the welfare of the animals than the money. But, MandaLao does just that. A new elephant sanctuary that started in August 2016, this organization brings out small groups of tourists who are looking for a responsible elephant encounter. Bathing, feeding, and trekking alongside these amazing animals is the attraction here, and both full and half-day options are available. At this time MandaLao is home to six elephants; five adult females and one baby male, all of which were rescued from the logging industry. Spending a day with them is a once in a lifetime experience that will not disappoint.

Read the other posts in the series here:

Do you have any recommendations on the best places to see elephants in Southeast Asia? 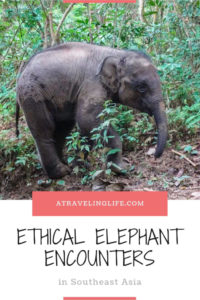 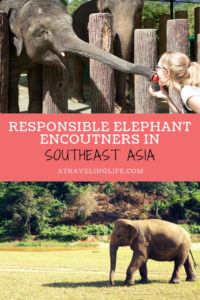 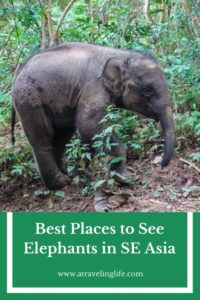 Lovely post! I absolutely love elephants. We’re also going to the Malaysian Borneo in April and would love to see the endangered forest elephants living there. I hope we will! Also, supporting the conservation efforts of elephants is highly important. Thank you for contributing to that, too!

Thanks, Piritta! There’s a lot of amazing wildlife living in Borneo. I hope you are able to see some elephants in their natural habitat!

Thanks! I know, I’ve been wanting to go to Laos for a while!

Awesome! I love elephants, they’re so fascinating animals! We’ve been to Elephant Nature Park in Chiang Mai too, and we had a great day. We fed them and washed them, but like Vicky says, everything is done at the elephants’ terms. For example: we heard about the funny show the elephants gave when splashing around in their mud bath the day before our visit, but when we were there, they didn’t feel like taking a mud bath and weren’t forced too. Great experience, never been so close to an elephant!

Thanks for sharing your experience, Birthe! It sounds like elephants definitely have minds of their own, and that the Elephant Nature Park respects that. I haven’t been there myself yet, but I hope to visit someday!

I went to BLES boon lot elephant sanctuary (they have a facebook page) in sukothai in thailand. It is amazing but you need to book a long time in advance.

Thank you, Valerie, for sharing! I hadn’t heard of BLES (Boon Lott’s Elephant Sanctuary) before, but it looks like it is doing amazing work in the best interests of the elephants.

Nice post. How about in the wild? We saw them in the wild in Thailand. There are a couple of national parks you can visit.

Wow, that must’ve been incredible! Hopefully I’ll get to have that experience someday as well.