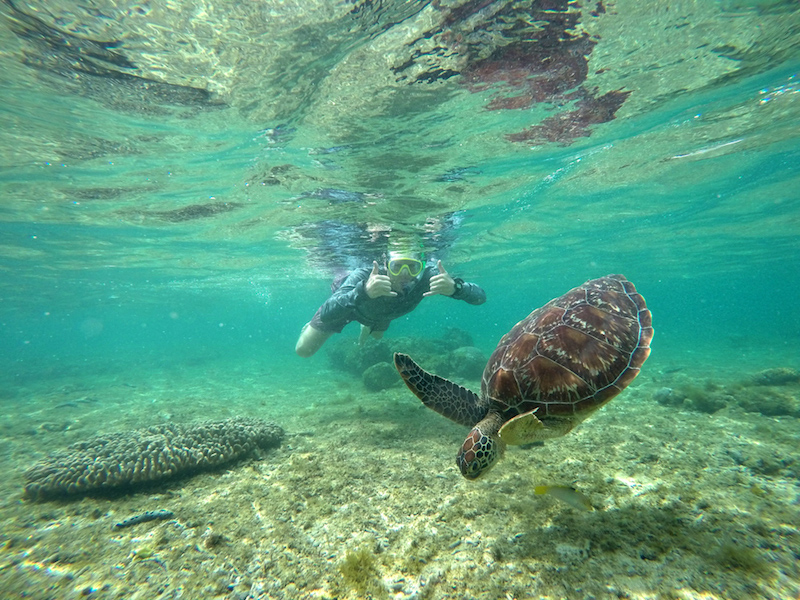 Inspired by my recent visit to the island of Palawan in the Philippines, where I was lucky enough to swim with whale sharks in a completely natural settling, I wanted to spread the word about other tours, attractions and experiences that are encouraging positive interactions between humans and nature. So I asked some fellow travel bloggers to share their favorite responsible wildlife encounters from around the world.

Swimming with Sea Lions in Peru

Contributed by Jordan of Inspired By Maps

One of my favourite animal encounters I ever had was getting in the water with sea lions in Peru. I loved how there are a strictly limited number of spaces available per day, only two operators are given licenses by the government and both co-ordinate to ensure the sea lions get their rest. The sea lions are naturally curious and not fed to encourage unnatural behaviour. The encounter occurs off-shore away from their colony so only willing and curious sea lions come out to play. When they are bored they simply swim off, and the boat leaves them in piece. You’re not allowed to touch them, but they do swim under and nudge you / nibble your toes! A great responsible animal encounter which encourages conservation in a sustainable manner (and an unforgettable experience!).

Contributed by Patti & Matilda of The Travel Sisters

Trekking mountain gorillas in Volcanoes National Park, Rwanda, is a humbling and amazing experience for any wildlife enthusiast. The endangered mountain gorillas can be found in Rwanda, Uganda and Democratic Republic of Congo, but Rwanda is the most accessible. Visitors trek anywhere from one to over five hours for an up close view of a gorilla family, including the Susa group made famous by Dian Fossey. Encounters with the gorillas are tightly controlled, with only eight visitors a day allowed to see each family and each visit limited to one hour. It is one unforgettable hour in the company of an enormous silverback gorilla and family eating, playing, fighting, and just hanging out. With less than 1,000 mountain gorillas left in the world, the entire experience is a privilege. 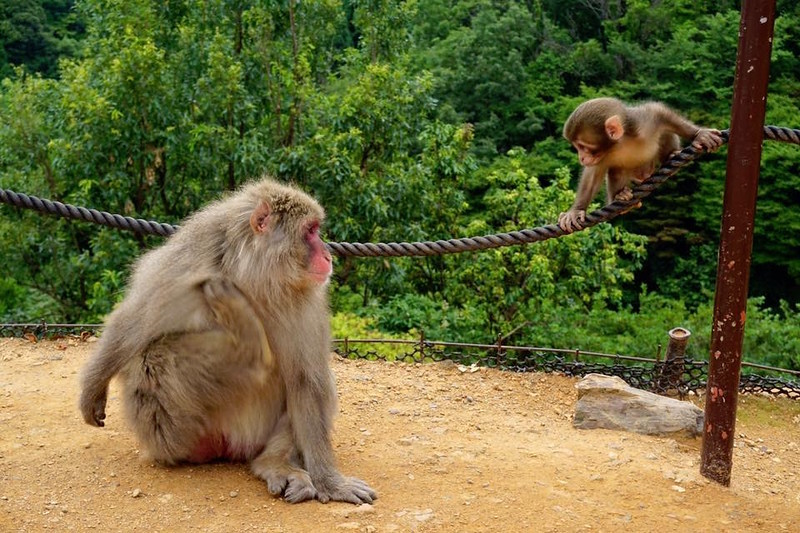 Contributed by Logan & Kallsy of Pages of Travel

For a short 20-minute hike and 550¥, you can visit Monkey Park Iwatayama in Kyoto, Japan. This preserved mountain area near Arashiyama bamboo forest is home to many snow monkeys (also known as Japanese macaques). Upon arriving at the entrance gate, you will be presented with a set of guidelines that are in place to keep you and the monkeys safe – this is their permanent home after all! Don’t be surprised if you are reminded many times during your visit that you are to keep your hands off the monkeys, not stare at them in the eyes (as they see it as a threat) and to not feed them while outside. However, you will find the playful baby monkeys highly amusing as they chase their mother and friends! On a clear day you can also enjoy the gorgeous views of the Kyoto skyline and the Oi River area below.

Walking among penguins in Antarctica

Contributed by Kach and Jonathan of Two Monkeys Travel

We recently came back from an expedition cruise to Antarctica, where we had the chance to walk among penguins in their natural environment. All landings have to be strictly coordinated by experienced expedition leaders and in accordance with IAATO regulations. The priority is always to create minimal interference with their natural behaviour. While we had to keep noise to a minimum and maintain at least 6 meters between us and the penguins, the penguins clearly hadn’t been told that. We frequently had to stand still, motionless and noiseless, while they waddle around us as if we weren’t even there. It was amazing! At every stage of the journey, the environment was placed first. Neko Harbour was our favourite landing, where huge pieces of glacial ice broke away in the background.

Chengdu Research Base of Giant Panda Breeding in Chengdu, China

Contributed by Carole of Travels With Carole

Located in Chengdu, a sophisticated Chinese city that is on par with New York, the Chengdu Research Base of Giant Panda Breeding is operated by panda conservation specialists. It is a large, clean zoo-like property that replicates the panda’s natural habitat of rivers and bamboo forests, and it has the largest captive collection of giant pandas in the world. A visit permits seeing plenty of adult pandas, plus sometimes some babies – which really brings out the craziness in people. The world’s largest collection of captive-born red pandas can also be viewed, and they are allowed to roam freely. It is good to know that China’s giant panda population was recently downgraded from endangered to vulnerable.

Contributed by Brianna of Casual Travelist

Tampa, Florida, may best be known for theme parks and beaches, but it’s also home to the Big Cat Rescue sanctuary. One of the world’s largest accredited sanctuaries for exotic cats, Big Cat Rescue is a leading advocate against the abuse of captive big cats and works tirelessly to save wild cats from extinction. Big Cat Rescue is home to a number of cats ranging from bobcats and servals to cougars, lions and tigers. These animals have been abandoned, abused, saved from being turned into fur coats, or retired from performing acts and now get to live out their lives at Big Cat Rescue where they get medical attention, space and love they deserve.

Read about Brianna’s visit here: A Day of Learning at Big Cat Rescue. 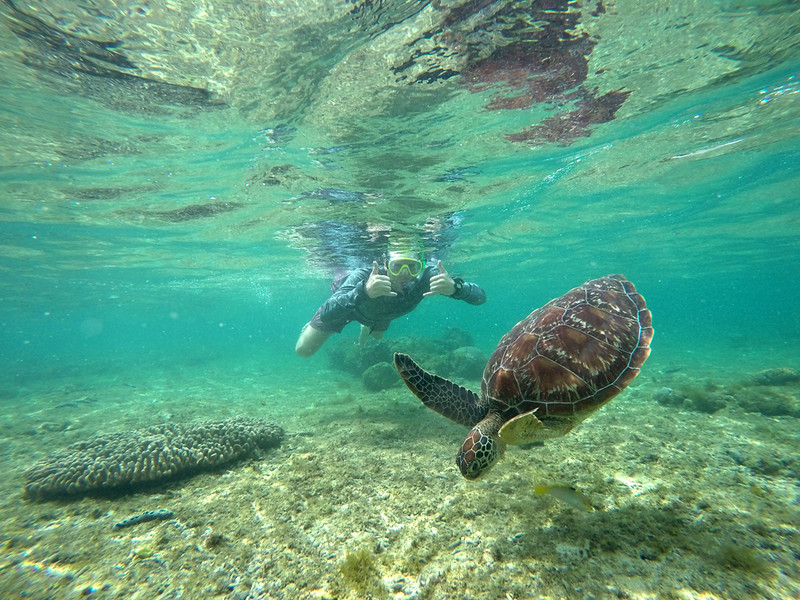 Swimming with Sea Turtles off Apo Island in the Philippines

Contributed by Jules & Christine of Don’t Forget To Move

Responsible tourism advocates and marine enthusiasts will love the opportunity to swim with sea turtles in the Philippines when they visit Apo Island. Not only is this an amazing chance to encounter these magical animals in the wild, but the activity also helps to support marine conservation on the island. Once a decimated species due to hunting, the sea turtles are now protected inside a marine park. The old fishermen, who used to hunt the turtles, are now subsiding their old income by working as guides inside the marine park. Tourists aren’t allowed inside the marine park without a local guide, and they ensure no one touches the turtles and everyone respects their environment. 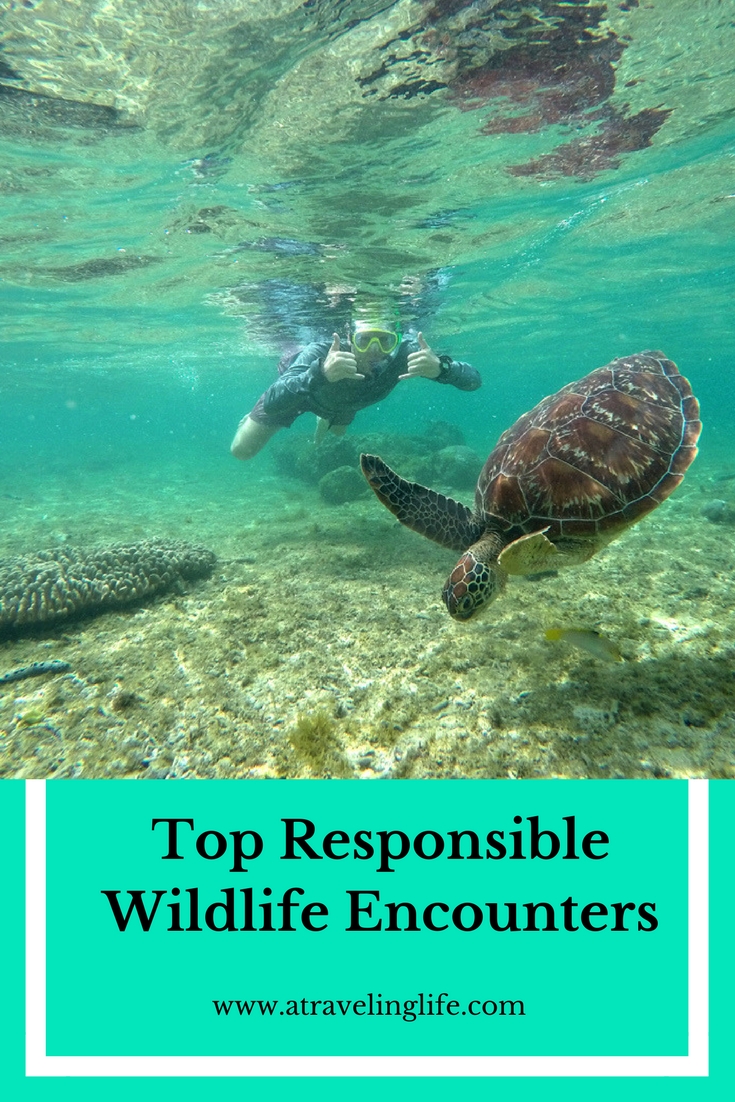 Responsible Wildlife Encounters from Around the World

Thanks, Sara, for doing your part to help wildlife in your home country! I hope to get to South Africa this year and will definitely be looking for responsible encounters.

Great post! I also love to see animals in their natural habitat! Every time we travel somewhere near the ocean, I’m trying to organise whale watching or something similar. Animals should live in freedom

I agree! Thanks for doing your part to support responsible experiences!

Brilliant piece Brianne! I absolutely support being a responsible tourist especially with wildlife encounters. Have you heard of Nara Park in Japan? They let the deer roam free and even be fed by tourists, but only with fodder that is sold within the park.

Thanks so much for reading and sharing a recommendation! I have heard of Nara Park, but I haven’t been there. It sounds like an amazing (and responsible!) experience!

How have I missed this series! Amazing! I run a similar ethical eateries series from around the world. Great to see places trying to make the world a better place.

Thanks, Bianca! I’ll have to check it out and see if I can offer some ideas.