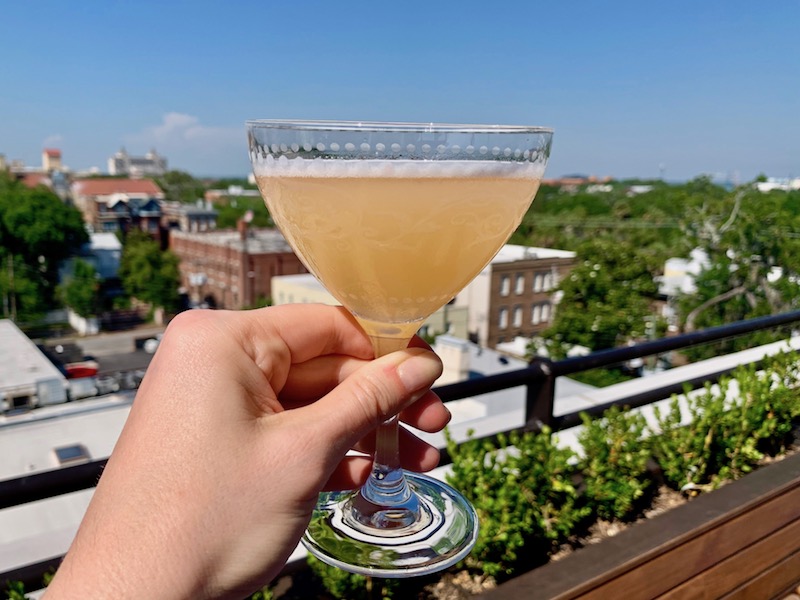 I mostly stayed put in April knowing May would be one of my busiest months of the year at work. Even so, I squeezed in back-to-back weekend trips to Portland, Savannah and Mexico City.

I frequently give the advice that life is all about balance; however, I’m very bad at taking my own advice. I’ve always lived life at full speed – going, going, going until I crash in a heap, unable to move off the couch for days at a time. (Only to get up and do it all over again.)

But I’m trying to get better at slowing down, saying no, and making my health a priority, especially now that I just celebrated another over-40 birthday, and I have a relatively new and very demanding full-time job. Knowing that May was going to be an incredibly busy month with both work and travel, I decided to take it easy in April, staying put in Boston except for a trip to my parents’ house in New Jersey for Easter.

Another memorable experience was cheering on my runner friends from the sidelines of the Boston Marathon. It took me until now – six years after the Marathon bombing – to feel like I was ready to return. But I’m glad that I did. There was so much energy and excitement along the course that it made me think that I should run a marathon as well – I had to keep reminding myself that I hate running!

Once May rolled around, it was full speed ahead. My first trip was to Portland, which is just two hours north of Boston. It’s one of my all-time favorite cities to visit. It’s compact and easily walkable, the brick buildings and cobblestones provide a lot of charm, and it has one of the hottest restaurant scenes in the U.S.

The reason for my visit – the first since I stopped by on my way to Rockport last summer – was to attend my 5th Women in Travel Summit. Wanderful has become such an important part of my life that I look forward to WITS all year. While the sessions are fantastic – I particularly appreciated the closing keynote, given by Obama Administration Social Secretary Deesha Dyer – I really love what a positive and supportive atmosphere it is.

Since I didn’t do any of the pre- or post-WITS trips, I was able to do some sightseeing on my own, exploring more of the West End, which I first visited last year when I was a guest of The Francis Hotel, and checking off some restaurants that have been on my list for a while like the Green Elephant and Otto. I also did my own little brewery tour, stopping at Austin Street Brewery and Lone Pine Brewing Company.

I rang in 42 in the beautiful city of Savannah. It was a quick trip – just two nights – but I got to spend quality time with two of my dearest friends, Beth and Karen. We all used to work together in Washington, D.C., and have managed to take annual trips together for 10 years now!

I was in Savannah twice before – once when I lived in D.C. years ago – and the second time was just last fall for my friend’s bachelorette party. (Savannah seems to be a popular destination for bachelor/bachelorette parties as well as for weddings.) During that trip I got to check out the The Olde Pink House, one of the city’s most popular restaurants. This time we focused on more contemporary places, The Gray – the executive chef there was just honored with a James Beard award – and Prohibition. Neither of those restaurants have many vegetarian-friendly options, so we were excited to find an adorable vegan cafe, Fox & Fig Cafe, while strolling around.

Another highlight of the weekend was kicking off my birthday with an outdoor yoga class in Forsyth Park, which was just a short walk from our Airbnb. It was the first time I tried an Airbnb Experience, and I loved being able to participate in one of my favorite pastimes in a new and beautiful location. (And the trees in the park looked so cool during downward dog!)

I’m lucky that I have friends who like to travel – it’s typically easy to find someone to join me on an adventure, and I’ve ended up in places that I wasn’t planning on going to thanks to their invites. In March I was at a cafe with fellow writer friends Kristin and Amanda, when we all agreed that Mexico City was high on our list of places to visit. So we jumped into action and planned a getaway for Memorial Day weekend.

It was my first international trip since November, and it capped off an incredibly busy few weeks of work and travel. Even though we only spent four nights there – which is not nearly enough time – I was so happy to be away from my daily responsibilities and soaking up a new experience. Of course before we left everyone asked, “Is it safe?” but we discovered that not only did we feel completely safe the entire time, it’s also an incredibly clean and orderly city (especially considering it’s one of the most populated in the world). It completely exceeded our expectations in every way.

We walked our legs off each day, exploring our own neighborhood, Condessa, as well as attractions like Casa Azul and Castillo de Chapultepec. We balanced out the exercise with lots of food – seafood, tacos and churros – as well as beer and tequila. Again, it’s all about balance!

I fell asleep on the couch at 7 p.m. on Friday, so I’m forcing myself to lay low this weekend. I’ve watched a lot of Netflix, and I’m getting much-needed laundry, cleaning and errands done. Next weekend, I’m back on the road, though! I’ll be a guest of the Tuxbury Tiny House Village in New Hampshire – yes I’ll be staying in a tiny house for two nights! Then it’s back to New Jersey for Father’s Day.

Banner image: at the rooftop bar of the Perry Lane Hotel in Savannah