Responsible Wildlife Encounters from Around the World 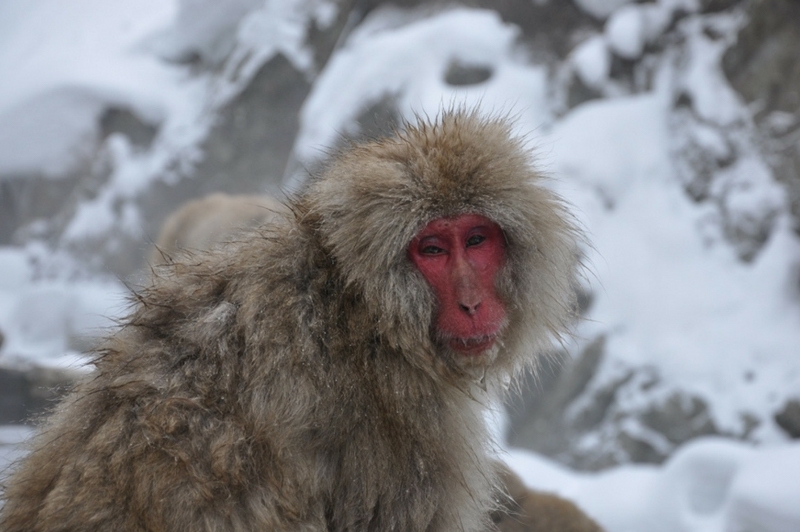 Inspired by my recent visit to the island of Palawan in the Philippines, where I was lucky enough to swim with whale sharks in a completely natural setting, I wanted to spread the word about other tours, attractions, and experiences that are encouraging positive interactions between humans and nature. So I asked some fellow travel bloggers to share their favorite responsible wildlife encounters from around the world. This is the first post in a four-post series.

Though we knew a sighting was not guaranteed, just the thought of getting glimpse at a rhino in the wild was all it took for us to sign up with Black Rhino Safaris. Our guide, Andy, educated us on proper behavior in the bush as well as how to actually track rhinos. Armed with this knowledge, we set off into the African bush in hopes of seeing this endangered animal in person. Within an hour, our tracking paid off and we came upon a crash of white rhinos. There were six in total including a large bull and a baby. We spent 30 minutes observing these majestic creatures in their natural habitat, an experience we will never forget. 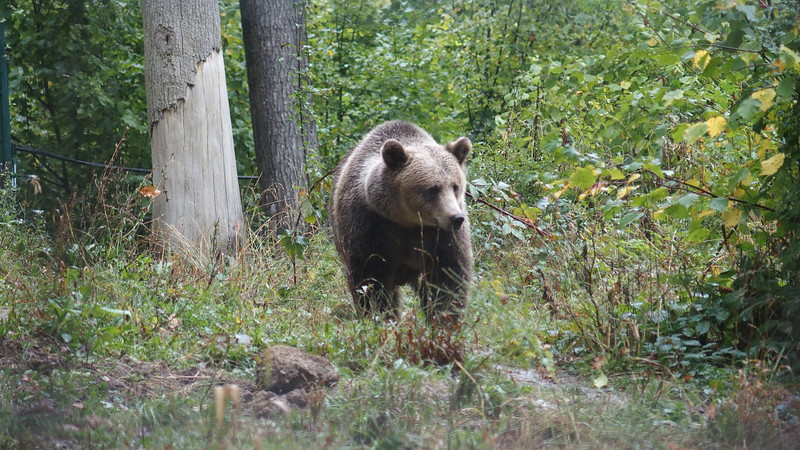 The Libearty Bear Sanctuary in Zarnesti, Romania is the largest sanctuary for brown bears in the world! The organization has rescued nearly 100 captive bears over the past decade. Most were enslaved as cubs, they had never climbed a tree or gathered food. They’d been confined to tiny cages and were completely neglected. Their natural instincts were completely eliminated, and they fully relied on the humans who abused them for their basic needs. At Libearty these bears are finally free to climb trees, swim in pools of water and are fed a natural balanced diet for the first time in their lives.  They live in their natural habitat on 69 acres of oak forest in the Carpathian Mountains. Currently home to 80 formerly captive bears, you’ll encounter many of the animals when you take a guided tour of the sanctuary. The revenue from your visit will be used to rescue and care for bears. The funds are distributed to purchase food for the bears, provide veterinary treatment, care for the forest, maintain the facilities, and rescue captive bears.

Read about Lola’s visit here: Libearty and Justice for All. 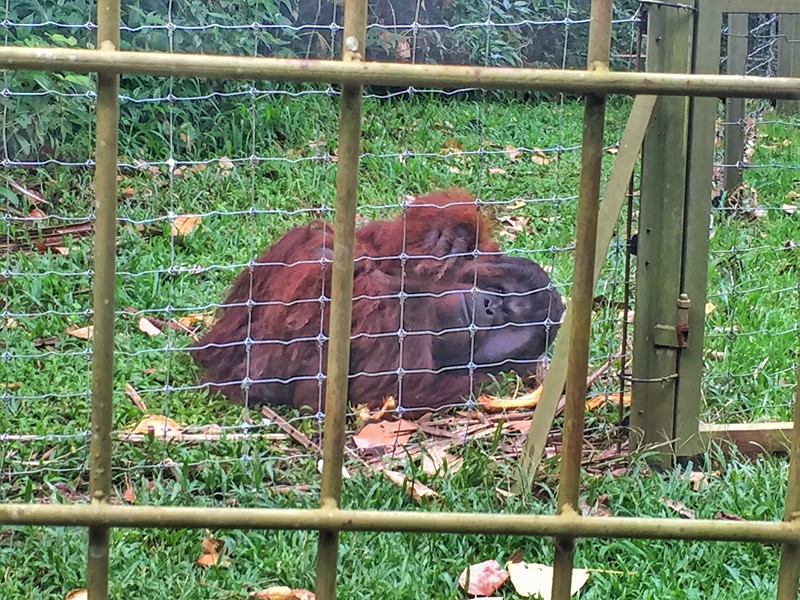 Don’t worry, the humans are the ones in the cage!

Orangutans attract special interest from humans as we share 97% of the same DNA. Native to Borneo and Sumatra, I was hesitant to visit Orangutan Island on the Malaysian Peninsula. Was it built purely for the tourist dollar as a glorified zoo? Having visited the island, I’m comfortable with my visit, having learnt the island has a working relationship with orangutan organisations on Borneo. The orangutans that are often rescued from dire situations can roam freely on the island looking at the visitors who walk through a cage on the island. The long term goal is for all the orangutans to return to the wild where practical, with another nearby island allowing them to further develop their instincts away from the few tourists who do visit. For those that cannot be re-released, the facility provides a world-class facility for conservation, research and education.

Read about Jub’s Perak recommendations here: 7 Interesting Places In Perak: The Malay State That Caught Me By Surprise.

El Centro Ecológico Akumal is a leading research and conservation non-profit based in Akumal, whose main objective is “to protect the nesting female turtles and their hatchlings, raising awareness among visitors and residents on sea turtle biology and conservation measures.” There are several exhibits, kids can speak with experts, and they even offer six- to 12-week volunteer programs for those over 21 years. You can also snorkle in Akumal Bay and see young, male sea turtles graze on the sea grasses. Finally, at the Centro Ecológico Akumal families can sign up to do a nighttime turtle walk to help search for new nests. The ecologists will mark the nests so that no one crushes the eggs unintentionally by stepping on the sand. Visitors are prohibited from getting to close to the nesting turtles.

Read about Becky and her family’s visit here: 4 Ways to Experience Sea Turtles in Mexico. 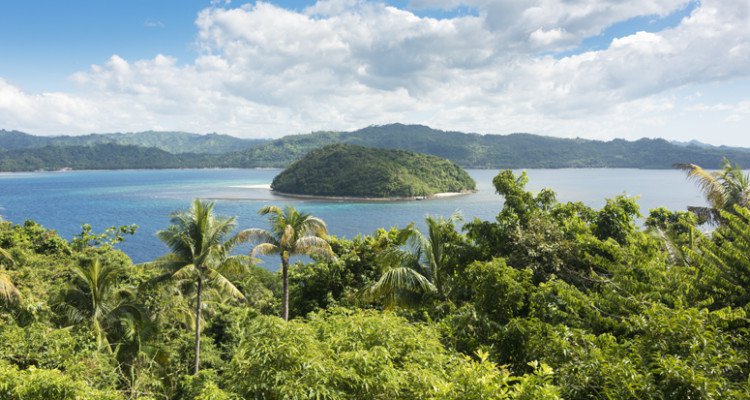 Danjugan Island in the Philippines

Contributed by Margherita of The Crowded Planet

Danjugan is a tiny island just off the coast of Negros Occidental in the Philippines, and it’s one of the best conservation success stories I’ve ever heard of. It’s a tiny island, only 500 m across and 1.5 km long, covered in rainforest, with bats living in caves and five lagoons full of marine life, surrounded by coral reef. 25 years ago the island was severely endangered by poaching and dynamite fishing, until a local conservationist bought it and turned it into a marine sanctuary. Nowadays, visitors can come and visit Danjugan Island on a day trip or for several days, to learn about the local ecosystem and go on guided hikes around the forest or guided snorkeling trips to explore the marvels of the reef. Accommodation is in eco friendly, solar-powered camps, where only a dozen or so guests are allowed to stay each night. It’s a magical place, the highlight of our month in the Philippines. 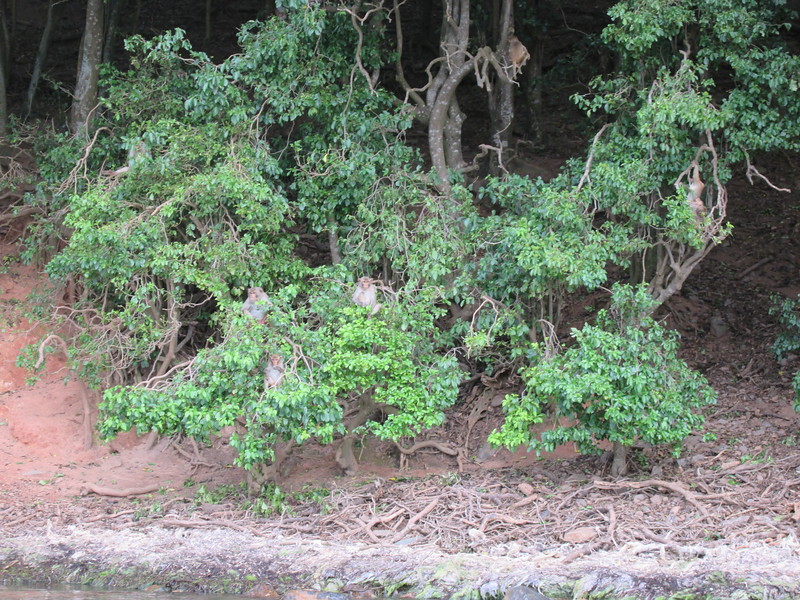 Contributed by Jen of JenThereDoneThat.com

One of the best kept secrets in Puerto Rico is Monkey Island.  The Rhesus Monkeys were originally brought to the island in the 1930’s for medical research. Now the island serves as a habitat for the over 1,100 resident monkeys. Visitors are prohibited from going on the island to protect the monkeys. The water is too shallow for motorized boats, so the best way to visit the island is by kayak from the shores of the main island of Puerto Rico at Punta Santiago. Kayakers have the best views for observe these magnificent primates with complete access around the island and up close views of the daily lives of the monkeys. 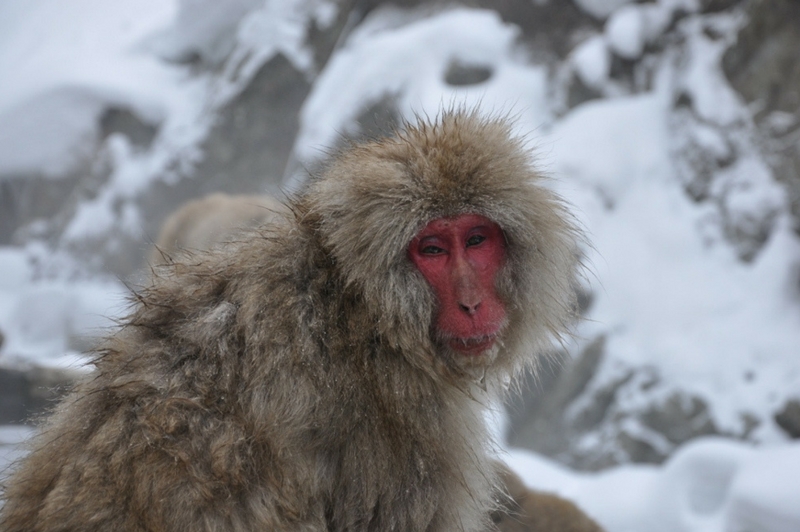 Contributed by Patti & Matilda of The Travel Sisters

Jigokudani Yaen Kōen (aka Jigokudani Snow Monkey Park) in Japan is home to infamous Japanese Macaques usually referred to as “snow monkeys.” Known for their red faces and hot spring antics, they attract visitors and photographers from all over the world. When you hear a name like “snow monkey park,” it is easy to assume that this isn’t a responsible animal encounter. On the contrary, there are very strict rules about not touching or interfering with the snow monkeys in any way. The monkeys are in their natural habitat and free to roam wherever they want. Visitors are only allowed to view them going about their everyday business. And it is delightful viewing snow monkey antics – some monkeys keep jumping in the onsen, some cuddle, some chase each other, some groom each other, and some just enjoy a hot spring soak.

Read about Patti & Matilda’s tips here: Snow Monkeys in Japan: How to Visit. 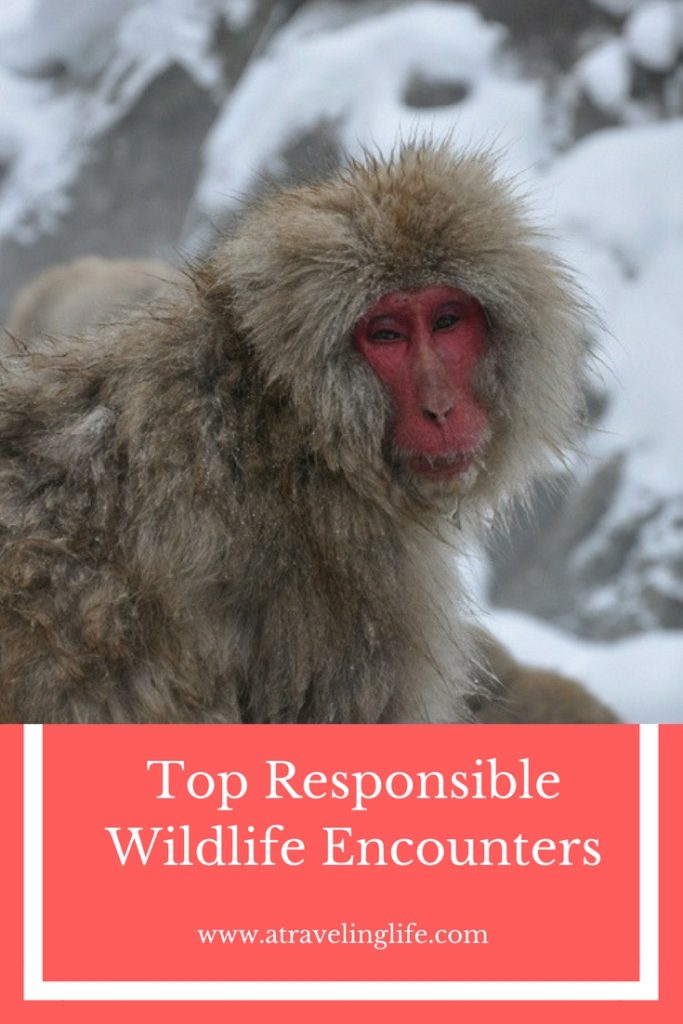 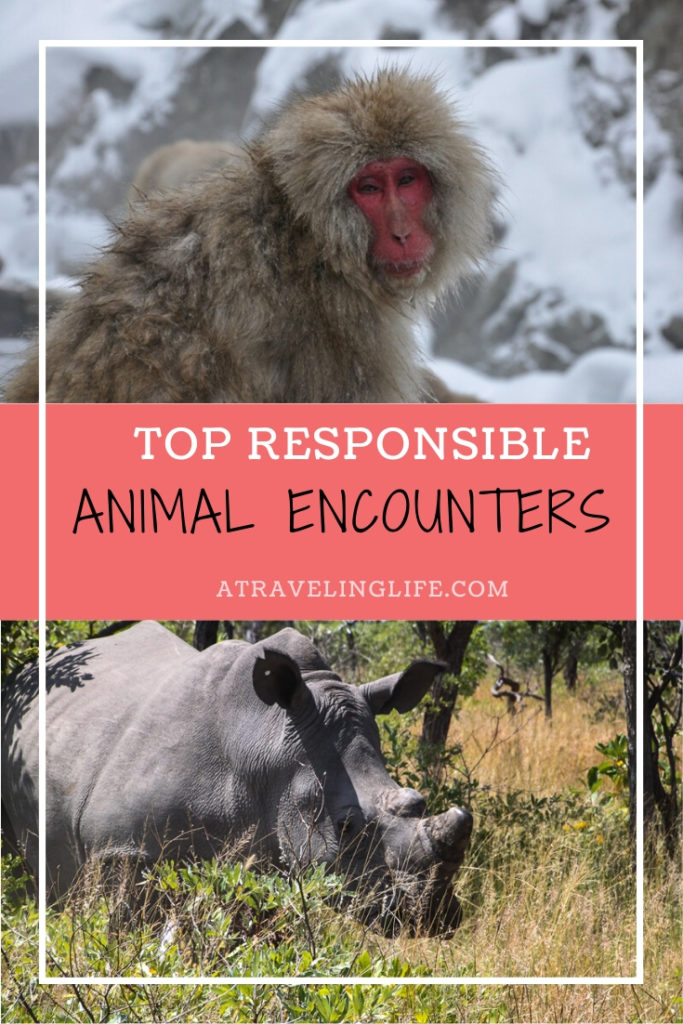 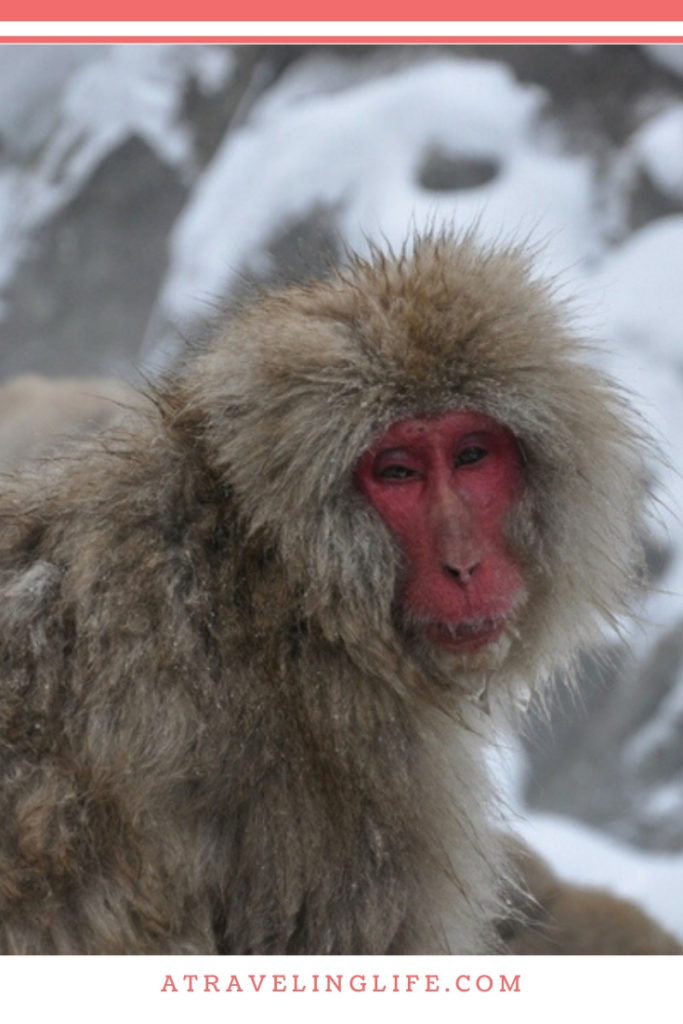 This is so helpful because it’s so hard to know which tours are ethical/responsible and where to invest your tourist dollars. I’m glad to have these recommendations, thank you.

Thanks so much, Katie! I’m glad you found the post helpful – I did too!

Great post! Love to see responsible tourism, especially when it comes to animals, as a focus!

Thanks, Hannah! And thanks for being part of the series.

Hi! I can recommend including the “Dancing Bears Park – Belitsa” in the Rial Mountain, Bulgaria (http://www.four-paws.org.uk/projects/bears/belitsa-sanctuary/). Most of the bears used to be exploited by gipsies as Dancing Bears. The Sanctuary is partly financed by the Brigette Bardot Foundation. The energy and experience one feels within the park words cannot express. Anyone, let me know if you need any additional help or information about the park or Bulgaria. I hope you find my input adequate to this article. Congrats for the idea, Brianne!!!

Thank you so much for the recommendation! Dancing Bears Park Belitsa sounds like it is a wonderful place. Those bears definitely deserve the care and comfort they are finally receiving.

This is a great post because I think most tourists think the animals at some ‘famed’ sites are looked after and they aren’t. Giving them ethical alternatives allows them to plan a trip that is also good for the destination.

Thanks, Lisa, for your interest! I’ve definitely made mistakes myself by supporting sites that I found out later weren’t so great, so I learned a lot too by doing these posts.